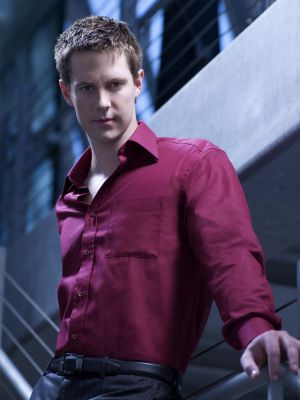 I love Jason Dohring. He is always playing Logan, but I love him anyways.

That love, however, does not rub off on his new show Moonlight. While my beloved Jason’s scenes and chemistry with the show’s lead are the best things about the show, it as a whole lacks almost every element of quality TV. This is especially sad when we think back to Jason’s last gig- the late Veronica Mars (moment of silence).

The stupid blond is almost bad enough an actress to warrant a role on Bionic Woman.
The last moments of the pilot could not have been more contrived.

It didn’t capture my attention for a single minute.

They clearly didn’t set up much of a mythology at all (ie: do these guys have souls? why does Mic have moral but Josef doesn’t?)
Shannyn Sossamon is still the most beautiful person in the world (remembered from the awesome film that was A Knight’s Tale- take a moment and appreciate the great Paul Bettany) but does nothing to improve the show.
and seriously- that blond is horrifying (she cant even do a convincing American accent)

the only thing this show accomplished was make me miss two wonderful shows that we’ll never get to see the likes of again: Veronica Mars (Jason Dohring really plays everyone just like Logan, which is not actually a good thing except that Logan was awesome) and the one and only true world of TV Vampires (Whedonia: Buffy and Angel- you don’t appreciate the detail, metaphor and wit of those shows until you see someone try to bring back the vampire genre)