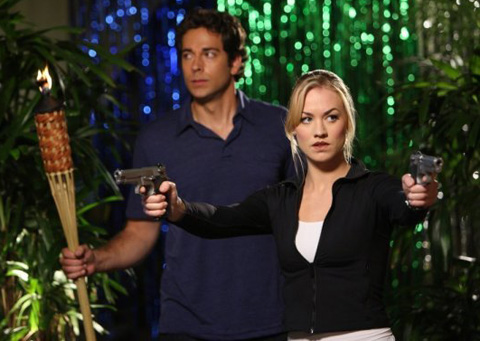 Its one of those in between shows- not brilliant by any means but still entertaining and worth the watch.

I decided to give it another chance and since I liked the second episode a lot better than the first I think I’ll go back indefinitely.
may I just say though that Zach Levi is entirely too attractive for this role. This may be the year of the nerd but apart from Big Bang Theory all the nerds look like supermodels (which kind of makes them the perfect guys… who wants a hottie who’s just hot when you can have one who can fix your computer?)

also: in stark contrast to what was intended to be the kick-ass blond girl on Moonlight, Sarah (Chuck’s kick-ass blond girl) is not only blond but seriously kick-ass. She’s pretty cool. I love Sarah Lancaster as Chuck’s sister and her Marshall Erikson–esque boyfriend Captain Awesome. I really like Casey as a foil for Sarah. Morgan kind of gets on my nerves but my crush on Zach Levi allows me to ignore the bits with Morgan and enjoy the show anyway.

It seems I wont be making so many hasty cuts from my TV schedule from now on.