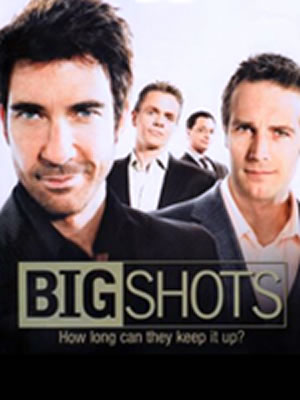 Not nearly as bad as its bad press would let on.

certainly better than chuck and big bang theory and miles ahead of bionic woman.
Id put Big Shots on par with Journeyman this season. Now that doesn’t mean I think they’ll make it- in fact I think both will be cancelled fairly soon- but they are both worth the watch (if after you’ve finished with Brothers & Sisters, Prison Break, How I Met Your Mother, Boston Legal, Pushing Daisies, Private Practice, Gossip Girl, Aliens in America, The Office, 30 Rock, Scrubs, Grey’s Anatomy, Ugly Betty, Kid Nation and Friday Night Lights you still have time).

Dylan McDermott and Michael Vartan get more attractive every day and Ive loved Josh Malina since his 2 lines in A Few Good Men. The characters are amusing (particularly the 4th guy whose name I don’t know) and while some of the dialogue is cliched its still fun to watch (although I would watch grass grow if there was a picture of Michael Vartan superimposed onto it). and (unlike the unlikeable hit Entourage) the male friendships ring true. Its a much harder dynamic to establish on screen than female friendships in because they tend to be more physically distant (the exception being Scrubs, lol). The creative team behind Big Shots seem to have successfully established a believable male dynamic that combines a bit of Alan and Denny with a bit of Marshall,Ted and Barney and a bit of Carrie, Samantha, Miranda and Charlotte.

Id love to see this show stay on the air not only for its eye candy but just so that Josh Malina can say he’s had a job that wasn’t given to him by Aaron Sorkin.