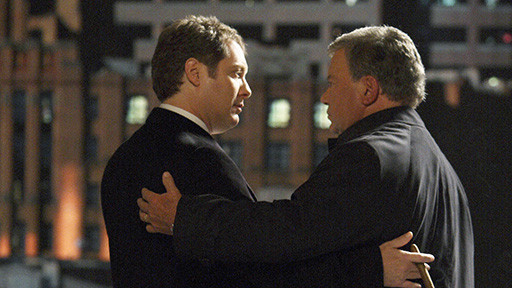 This season’s premier of Boston Legal was in every sense a classic Boston Legal episode with every feature that I mentioned above. They somehow managed to fire half their cast and hire an entirely new one whilst maintaining not only interest but plot that the audience has come to expect. I didn’t miss Constance Zimmer at all (and I’m a really big fan of hers). It was the smoothest cast transition since the world forgot that Hawkeye ever shared a tent with anyone other than BJ and Charles.

The Denny and Shirley moment when he sang “You are my sunshine” almost made me cry- it was absolutely beautiful, one of the best moments on television ever (from 2 characters I don’t usually enjoy watching), Jerry berating John Larroquette’s character for being mean was spectacular “even if I was serious you never head butt” and Clarence’s performance at the end was pure happy (Big Hairspray fan so it was predetermined that I would love that). I’m glad they’re onto another big murder trial that will last a couple episodes (last year’s was fascinating) and as of yet I don’t hate the new girl (though the one that will be hired next week promises to be hatred worthy).