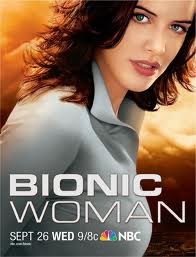 A Big Pile of Bionic Waste

I must confess that I got only half way through the pilot episode of Bionic Woman before turning it off in repulsion- and I had to force myself to get that far. I start of every new TV season with every intention of watching absolutely everything, at least giving it a couple episodes to win me over (after all, I hated the Grey’s pilot and subsequent couple episodes but now it’s one of my favourites currently on the air). This is just too bad though, there’s too much on this year to waste my time on something that’s so un-enjoyable I would rather be writing my term paper that’s due next week than watching it. If it becomes a huge hit I might someday return (like I plan to with heroes and with lost) but as of now I refuse to watch any more Bionic Woman.

Firstly there is nothing more annoying on TV (or any medium for that matter) than an actress who seems like every line she’s saying is being read from a script. This is partly the fault of the writers since the other characters do it a bit as well but it’s really evident in the lead. Memo to TV producers: just because she’s pretty it doesn’t mean that she’s an actress. God I miss Buffy, back when actresses could dress like supermodels, be witty and engaging, hit the high emotional moments and kick serious vampire ass all at the same time. See Grey’s for more examples of both extraordinarily beautiful and more normal looking people with serious acting chops. (and writing ones too- go Shonda!).

Also: I know they tried to justify this but since when do genius professors (who happen to be young and hot by the way) date drop out bartenders… can you say “this TV, we can do anything”. THINGS PEOPLE CAN BELIEVE IN AND RELATE TO WORK BETTER!!!!! these producers are idiots. and let us not forget the wonky editing (why does the color composition keep changing in the hospital?

This show is an example of everything that’s wrong with TV. When people finally decide they’re going to switch the channel from drivel like Deal or No Deal and Survivor and tune into something scripted and find this (an unoriginal, badly scripted, badly acted, badly edited play for viewership off false novelty), they simply tune back into the reality shows.

is this show does really well Ill be sooo pissed.
and to think no one is watching Friday Night Lights- may I present to you the idiocy of North America!