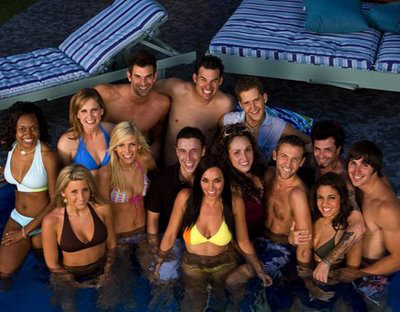 I have a confession to make. Though I on a regular basis sing the praises of intelligent television and curse the squalor that is reality television, I love, and have loved for some time now, Big Brother. I tried to give it up when 6th season rolled around but by the time I found out about season 7 being All Stars I was back wasting my time 3 hours a week watching the addictive social experiment in the big brother house. The genius that is the evil dr. will had me not only glued to my couch but also extremely excited about the next episode (almost as much as I am for new episodes of How I Met Your Mother and Prison Break). And now we are on season 8, a new set of unrealistically attractive people and I am not only back, I am in a worse condition than even when I was watching my beloved will. I watch all 3 episodes a week, I listen to three different podcasts after every episode and today I even ordered the live feed and have spend entirely too much time watching it. At the moment Zach and Nick are sitting in a giant tea cup strategizing as to how to best work the house with their alliance. Zach is saying things along the lines of “I need more time with you” as Nick lies to his face (and he buys it) that he is 100% with the alliance only minutes after he swore to Amber that he has her back and wants Zach out ASAP. Sad, but exhilarating. Its pathetic but I love it. I would like to claim that Big Brother is a sophisticated study of human interaction but I would be lying through my Jedi master of BS teeth. Its crap. Watching beautiful people scheme and fight and make fools of themselves is some of the best entertainment there is and I’m not ashamed to admit it.