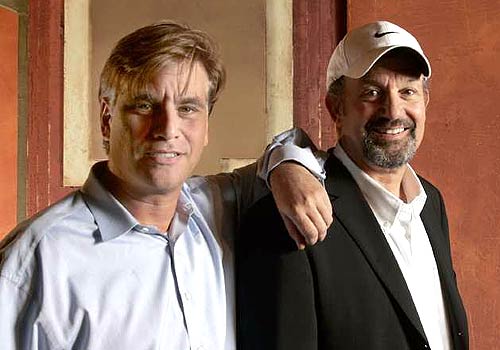 Dear Aaron Sorkin, I love you

Studio 60 on the Sunset Strip. That’s all I have to say about the current state of television. There are all the reasons in the world to lose faith in television as an art form. Deal or no Deal has somehow replaced jeopardy, The OC and One Tree Hill are the only remains of Dawson’s Creek and every other show is about lawyers or doctors. For years, one of the last true commendations for television legitimacy was Aaron Sorkin’s drama The West Wing. Now that its done, in its place we are left with the brilliant yet struggling Studio 60. Television is still alive AND artistically legitimate; its simply a matter of watching the smart stuff. If the millions of viewers who complain about the lack of intelligent programming had been tuned in to the intelligent programming on NBC at 10 on Mondays they would have seen Jordan Mcdeer (Amanda Peet) fighting for great programming. If no one watches the great stuff, no one is entitled to complain when it’s gone. As for Aaron, when the public doesn’t come through for him I sincerely hope he writes anyway and continues his attempts at force feeding the American public what they need to be watching. We’ve already lost Jack and Bobby, American Dreams, Joan of Arcadia and Everwood to cheap, stale and unstimulating mush, don’t let us lose Studio 60 as well.