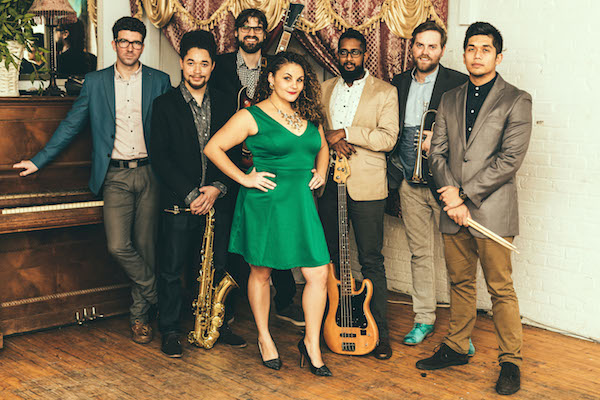 The classic RnB revival gets a boost later this month with Toronto band YUKA‘s fourth release – their first on vinyl – called From the Ancients.

For Yuka, the RnB/soul sound is anything but a trend. “Everyone in the band likes that kind of music,” says guitarist James Tayor. “The sound of that music is so much more powerful.” The band delved deep into old school authenticity on the release, recording From the Ancients on an 8-track system onto vinyl. “Recording it like an old band would,” he explains, going on to describe a recording process that doesn’t often take place in the 21st century. “Everyone was in a live room,” he says. “There was very little editing involved. It was more like a live band experience.”

There is a spontaneous, improvisational edge to many of the songs that adds to the live effect. “A lot of these tunes, we went in with sketches,” he explains. “We wanted to have that looseness and freshness.” He also admits, with a laugh, that they were somewhat time-challenged.

The core of Yuka – James Taylor on guitar, Chino DeVilla on the drum kit, Ben MacDonald on sax and Patric McGroarty on trumpet – have been together since their college days, united by a love for classic soul music. Todd Pentney on keyboards and R.J. Satchithananthan on bass were added to form the band, who played as an instrumental outfit for the first few releases. A couple of years ago, vocalist Claire Doyle came along and seemed like a natural fit.

“We booked a cover gig where we needed a vocalist,” Taylor explains. The match was clear from the beginning. “Now she’s a big part of the group. We’re happy with it. She’s really into the old school stuff. She has a great sound for that. She also adds a lot of stage presence. ”

From the Ancients features an energetic soul sound full of rhythmic and harmonic complexities in a classic soul/jazz/RnB mode. It’s a nice, clean sound, but not bloodless – RnB needs the right edge of emotion.

“Good To Me” is an upbeat track, with lyrics that cover the usual love and lust territory over crisp, precise drumming and judicious rhythm guitar in a mod-era vibe. Claire Doyle’s strong vocals are up front and centre. It’s one of only three tracks featuring vocals.

The musicianship is impressive enough to make you forget there’s no voice or words on tracks like “Meterstick”, a highlight of the album in a sexy guitar-driven instrumental track with a great horn line. “Defibrillator” features impressive drum work and the title track is a danceable instrumental song with an often spooky retro vibe that builds in layers of intensity.

That being said, it would still have been nice to hear more of Ms Doyle’s voice; she adds a different dimension. In the band’s bold cover of Taylor Swift’s smash Shake It Off, she takes control of a nice, slow groove.

Toronto audiences will get to slake their growing taste for old school soul later this month as Yuka celebrates with a live CD release party at 3030 Dundas West on April 22. Look to see them live in clubs in Toronto and beyond through the summer.