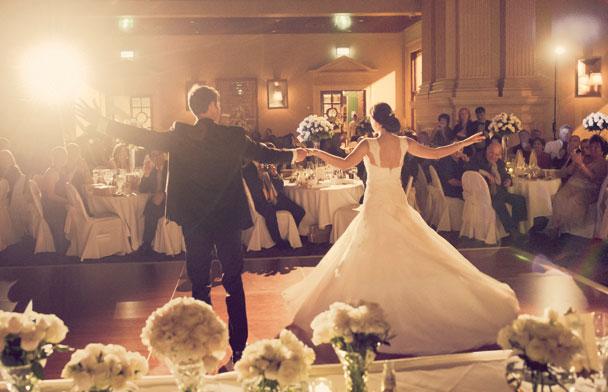 It’s all about the soundtrack. Every good event needs a movie-worthy beat to carry it. A couple of songs, musical swells that really accompany the magic taking place. Your wedding is an epic that demands a great setlist. Whether it’s is a posh affair, a country rustic celebration, or a comical and eccentric romantic episode, your happily-ever-after needs not only a fantastic melodic swing but a setlist to raise the roof and make everyone get to boogie with your love.

Your wedding should be a personal affair. It should be an event that speaks from the heart and your songs are in part an extension of that spirit. Yes, they can tell a chronological story of your courtship – the tune you first made out to or the song on the radio when you first made love – but they must also appeal to all your guests.

Here are some awesome tunes with a rather generous dollop of maudlin passion to really bring out the magic of your event. All the songs work wonders for that tear-jerking moment when the bride walks down the aisle.

“All Of Me” By John Legend.

This hit song, dedicated to Legend’s wife Chrissy Teigen is a tender piano ballad that is a must in all romantic gatherings. It’s simple and modestly made but it speaks volumes about a person’s love.

This Baroque piece by German composer Johann Pachelbel is one of the greatest chord progressions used for wedding ceremonies in the Western World. It adds class and glamour to any occasion lending the venue an air of old-world charm.

“A Thousand Years” By Christina Perri

This sleeper hit from the Twilight Saga: Breaking Dawn Album, went viral as a wedding song on account of its lyrics. It is written as a vehicle for the movie’s protagonist, Bella, to express her undying love towards her soon to be husband… You really can’t go wrong with this amazingly profound piece.

This rewrite of Franz Schubert’s “Ave Maria” debuted in 2008 to lukewarm reviews. Nonetheless, since that moment, the pop-R&B ballad has become a perfect companion piece for wedding receptions and even for that thrilling moment when the bride walks down the aisle.

Recorded for Ed’s second studio album, “Thinking Out Loud” became the first-ever single to spend a full year on UK’s top 40. This romantic ballad with blues influence has actually been referred to by the artist as: “the walking down the aisle song… That’s why I wrote it.”

“Somewhere Over The Rainbow/What A Wonderful World” By Israel Kamakawiwo

This is medley of different songs ended up creating one of the most iconic wedding tunes in recent history. The mash-up was recorded on a spur of the moment session in 1988, in one take, and with very little equipment and since then it has thrilled lovers and couples alike with its simple Hawaiian melodies and Ukulele rhythm.

“Can’t Help Falling In Love With You” By Elvis Presley

It’s the King, you simply can’t have a wedding without the King present. This legendary song from his Blue Hawaii album has become a fixture and a good look token for newlyweds everywhere.

“Marry Me” By Train

A top 40 billboard hit, this 2009 rock anthem about love quickly became the go-to song for every romantic staple.

One of Taylor’s earliest compositions, this song was inspired by William Shakespeare’s play Romeo And Juliet. Taylor used the source material of that iconic tragedy and twisted the end, replacing the doom and gloom conclusion with a happy ending.

Wagner composed this piece for his 1850 opera Lohengrin. This is the classical march played as a bride enters the chapel and walks down the aisle. The original piece, with its strident marching tempo, was made popular when it was used as the processional in the royal wedding of Victoria, Princess Royal, to Frederick William of Prussia in 1858.

From R&B singles to retellings of tragedies, you really can’t go wrong with any of these songs. Each is a world onto itself and each adds magic to your wedding day. When walking down the aisle any of these timeless melodies will really make your day shine. And, if you still can’t make up your mind as to which you want to use, don’t worry, you can always sneak them into the reception set-list… It’s your day, time to have your cake and eat it too.