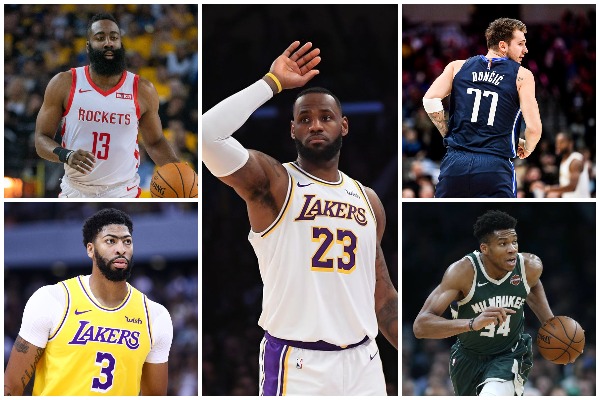 The NBA regular season is long and there are a lot of games left in 2019-20. And yet, there are several players that already stand head and shoulders above everyone else.

They will be fighting hard for one of the greatest individual honors in the NBA – the MVP award for the regular season. According to the odds available at online sports betting sites, the following players are leading the race right now.

The only logical place to start would be to take a look at Giannis Antetokounmpo. The Greek Freak won the MVP award for the 2018-19 NBA season and is one of the favorites for the current campaign. He has improved his game even further and the Bucks will most likely win the top seed in the East.

Giannis is dominating most teams in the paint and his defense is sensational too. On top of everything else, he’s shooting threes more regularly nowadays. The percentage from the outside is hardly ideal but the power forward is improving. Giannis seems the most likely candidate for the award right now, as he is simply unstoppable.

The Beard feels he was overlooked for the MVP award last season and no one can blame him. Harden averaged more than 35 points per game which is simply unbelievable. He somehow managed to raise this number for the start of the 2019-20 campaign.

If Harden keeps it up and the Rockets win a top 3 seed in the stacked Western Conference, we may very well see the Houston guard with the trophy.

We all knew that Luka Doncic is one of the most talented players in last year’s draft but few could have predicted just how good the Slovenian is. The prodigy is only 20 and he’s probably the best player in the history of the NBA at that age.

Doncic’s vision is second to none and helps him do everything on the court. He is one of the best scorers in the entire league and is close to averaging a triple-double. He’s also solid defensively and his performance is bringing the Maverick a ton of wins.

Many expected that Dallas would be a borderline playoff team at the start of the season, but it seems that the franchise will be fighting for a top 4 in an insanely strong Western Conference.

If Luka keeps the same tempo and his team does finish well, we could see him as the NBA MVP in 2020.

After a quiet maiden season in Los Angeles, many though that LeBron James might be on a decline. Well, the start of the 2019-20 NBA season proves that the King is still here and he’s stronger than ever.

LeBron is simply flying right now and contributing on both ends of the floor. He’s expertly running the offense and does not shy from scoring a ton of points himself.

At the same time, he’s putting a lot of effort on defense and is helping his team shut down the opposition.

The only potential problem is that James plays alongside another MVP-candidate in Anthony Davis. If the Lakers are successful, the votes for those two might be split in a way that would prevent them from winning the award.

Since we mentioned the LA Lakers, Anthony Davis simply can’t be left out of the conversation. Some people forgot how good the Brow is during his absence, but he quickly reminded the world that he is one of the best NBA players out there.

After a somewhat slow start by his standards, Lakers coach Frank Vogel did his best to involve Davis in the offense more. The results are stunning and AD is just killing it. Let’s not forget that he’s also one of the best defensive big men in the league.

Similarly to LeBron, though, playing on the same team with another MVP-caliber player could be a problem.

Racing for Dummies: a beginner's guide
Music 101: To Read or Not to Read
TV to Games: The Best Quiz Shows to Succesfully Gamify