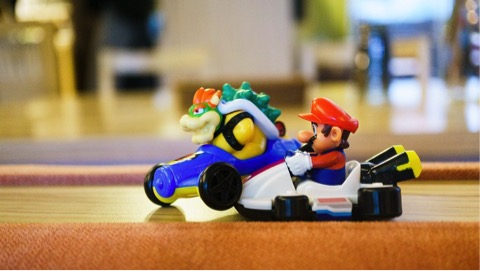 Mario Kart Tour is the fourteenth title in the Mario Kart franchise, which has spanned over 18 years, beginning with the original Super Mario Kart for the Super Nintendo console in 1992. However, Mario Kart Tour is not a console title, not available on any current Nintendo systems – it is entirely for Android and iOS devices.

Nintendo has a bit of a hit-or-miss relationship with releasing games for smartphones, typically releasing games that attract millions of downloads, but fail to capture any long-term longevity. This rang especially true for Super Mario Run in 2016, which garnered more than 200 million downloads, but did not reach even a 10% conversion rate, according to Nintendo themselves.

That didn’t stop Nintendo from exploring other titles, including Fire Emblem Heroes, Animal Crossing, and the ever-popular Pokemon. So with a bit more mobile success under their belt with other titles, Nintendo decided to try once again with their iconic Mario character, releasing two Mario-based titles this year – Dr. Mario World and Mario Kart Tour. Thus far, Mario Kart Tour has exceeded expectations, on paper, accomplishing 10 million downloads within its first day of release on September 25th.

With all that said, let’s review Mario Kart Tour and how it compares to previous Mario Kart titles, while being adapted to smartphone controls and gameplay.

While retaining the kart racing premise of the franchise, Mario Kart Tour branches out in a different type of gameplay. Instead of focusing on the racing aspect, Mario Kart Tour utilizes a point-based system. We’ll get into that, but let’s explore how the gameplay was adapted for smartphone devices.

Sadly, the gameplay has been overwhelmingly simplified for touchscreen devices. Your kart automatically drives itself, and you only need swipe left or right to steer around corners. If it wasn’t for the familiar power-ups of the Mario Kart franchise, it’d feel like a kart-based version of something like Temple Run or similar. So essentially, Mario Kart Tour is assuredly not a racing title, despite being a part of the Mario Kart series, but is for all intents and purposes a gacha game on top of vastly stripped down ‘racing’ mechanics.

You do not advance for your finishing placement in races, you advance based on stars. Throughout the race courses, you earn stars for using items, accurate timing of turning, and hitting jumps. So basically, you could finish in last place, but still advance through the levels by simply choosing the right blend of items for the level you’re on.

As I said earlier, your kart pretty much drives itself, and it’s possible to finish levels without ever touching your screen at all.

In typical gacha game fashion, Mario Kart Tour is heavily loaded with microtransactions. You begin the game with a limited amount of karts and power-ups, and need to spend rubies to get more – randomly, I might add.

You do not buy items directly, but feed rubies into a pipe that then spits out random items. It’s basically gambling. That’s nothing against gambling, it’s just, if I wanted to combine go-kart racing and gambling, I’d probably have more fun hitting up the Niagara Speedway and hitting up some casinos along the way, as regulations allow a number of casino sites to work in Canada.

I hate to sound cynical, but Mario Kart Tour is simply another lacklustre gacha game in a long-line of mobile gacha games from Nintendo, and there are so many free-to-play games that are heavily based on microtransactions, but offer far better gameplay than what Mario Kart Tour and other Nintendo mobile titles serves up. You’re really only getting the familiarity of the Mario Kart series here, with none of the challenging gameplay that made Mario Kart such a successful franchise.

Even more laughably, Nintendo gives the illusion of Mario Kart Tour being a multiplayer game, by having the bots you’re racing against have names that appear like Nintendo Account usernames. They also threw in a $5 per month ‘Gold Pass’ subscription, which instantly unlocks a few things you could unlock throughout normal gameplay. Of course, that’s pretty par for the course with many F2P mobile games.

I guess what makes Mario Kart Tour leave a sour taste in my mouth is that Nintendo, as a company with a market value of over $37 billion USD, has the resources to make enjoyable, compelling, original games for smartphone devices, and yet instead focuses on loot boxes and gacha-style monetization, plastering their iconic characters like Mario on top of it for brand appeal.

While Mario Kart Tour could become wildly successful and earn millions in revenue, leaving me to eat my words, I have the strange feeling that this will be just another flash-in-the-pan experiment by Nintendo, with no real longevity behind it.