The Heavyweight Division is Wide Open 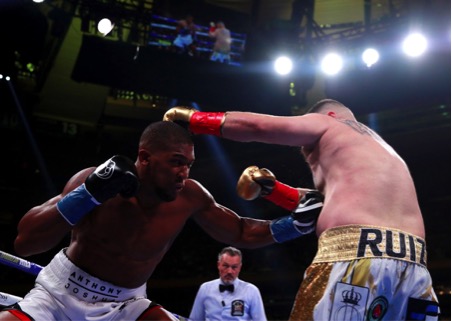 Saturday night was meant to be the start of Anthony Joshua dominating America. Madison Square Garden was full and the scene was set.

However, it was the fairytale ending for Andy Ruiz Jr, not Joshua and an already interesting heavyweight division has been blown wide open.

The bookmakers were giving Ruiz little hope, in fact the World Champion was meant to blow the Mexican out of the ring in more style than Deontay Wilder did Dominic Breazeale just a few weeks prior. Instead, it was the Brit knocked down four times before a seventh round stoppage.

What that does is open up the division and lessen the bargaining power of Joshua, who is no longer “invincible”.

That could mean we see him fight Tyson Fury and Wilder sooner than we think. Fury has his own test first though against Tom Schwarz, where the Brit is once again a heavy favourite.

According to canadiansportsbetting.ca/online-bookmakers/ most bookmakers have him at around -5000, but then again Joshua wasn’t expected to lose either.

Should Fury do the job, which we expect, an exciting year of boxing lies ahead. For Joshua, a rematch with Ruiz will come first, while it could be likely Wilder and Fury rematch in the fall.

On top of that Dillian Whyte could also play his way into contention with a win over Oscar Rivas on July 20, giving plenty of options.

While there are no dates set between the big three, this shake-up could encourage them to get them made.

Both Fury and Wilder have gone to favourite to beat Joshua now at -189 and -137 respectively. And they’re fights Joshua has to take if he’s going to improve his brand in the US.

Fury and Wilder’s stock are high following their epic showdown last year, which they’ve just agreed to do again, and with Joshua being knocked down four times and going out with rather a whimper it could welcome further talks.

In the US you have to win in style, just as Prince Naseem and Lennox Lewis did previously. Joshua hasn’t done that and he’s no longer in the driving seat.

Not even a rematch victory will change that, which will likely take place in the UK in November. This fight could be the catalyst we need to see the big ones.

It’s undoubted Joshua will come back and it’s very likely lightning will strike twice and he’ll lose to Ruiz again. He never really recovered from being caught in the third, trying to get Ruiz out and he will learn from that. But the American and Canadian fans won’t forget and he’ll need a big fight there for them to take to him.

The next 12 months are going to be critical for the division and this defeat could be the catalyst to make things happen. If Fury and Wilder were worried about facing him, they will no longer be and it’s unlikely Joshua will be able to demand the same sort of fees if he’s looking to repair his reputation.