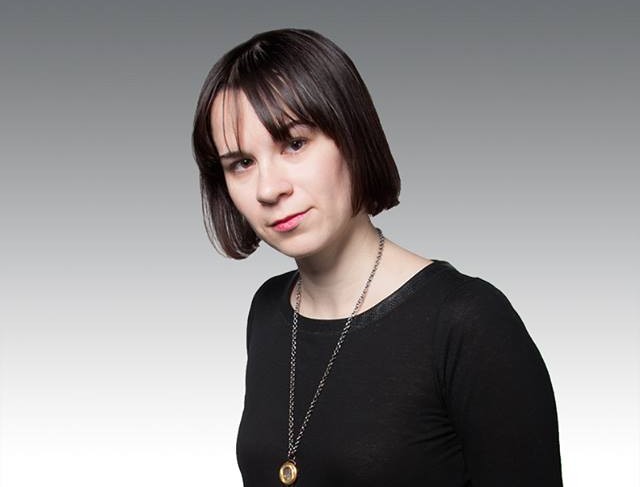 We try to stay away from nominating the same person twice in a single category. Claire Hill gave us no choice. Her work with two standout Theatre Brouhaha shows in 2014 was inarguably some of the best in all of Toronto indie theatre and the two sets were so different that we couldn’t help but celebrate them both. The immersive and detailed campground of Retreat and Cockfight‘s metaphorically suggestive but practical sand-filled fight ring made Kat Sandler’s settings come to life and brought the audience right into the (honestly pretty dangerous) action.

We talked to the bold and thoughtful double Best Design nominee to gain some insight into what it takes to create such intricate worlds.

Can you remember the first theatre production you ever saw?
I was deeply obsessed with The Wizard of Oz as a child, and so my parents took me to the show when it opened The Royal Alex after it was renovated. It was 1989, I was three, and I still remember, in great detail, the design of the show more than anything else. I have clear memories of wondering how the hell they did everything. I was really taken with how different the design was from the movie design. Astrid Jenson did it, and she didn’t do the standard MGM rip-off, nor did she even really imitate the illustrations from the book. She made it her own. And I think that’s why I remembered it for so many years after I’d seen it, and why I was so fascinated by it as a kid, because I really knew everything about The Wizard of Oz, so seeing a new interpretation was a big deal.

How did you get into designing?
I tried escaping many times. I’ve worked in many other capacities in theatre, but I keep getting sucked back into design. The short of it is that I learned it had to be the thing I do through trying many other things. I suspect that’s the only way to make it in the long term- knowing there’s nothing else you’d rather do.

What was the first show you ever worked on?
Kiss Me Kate at Wexford Collegiate. I joined stage crew so I could skip class.

How did you first get involved with Theatre Brouhaha?
They found me. I’d seen their plays and loved the work, but I didn’t really have an in with them. I designed Contractions at the Storefront last May, and Kat Sandler came and saw it and basically hunted me down to do Cockfight. I got text messages that night from three separate people being like “Kat Sandler is looking for you.”

Tell us first about developing the design concept for Cockfight. How did the idea develop and work in practice with such a physical performance?
The show was already in rehearsals by the time Kat and I connected, and initially she wanted me to consult. She knew it would be in the round, that there would be sand, and that the boys would build the ring, but that was about it. I read it and came up with the way the ring would be built, the paint design, and the screens on the ceiling, and I came to her with some drawings and she was sold. In practice, it was harder to build than we thought, and the amazing technical team, led by our TD Christopher Ross, figured out how we’d install the poles and get the chicken wire set up night after night. It was a huge team effort to get it safe enough for the actors to perform in, but rough enough to still look DIY.

What were some of the technical challenges of the design?
Safety, mostly. We were the first people to drill into the floor at Storefront, which has tiles that have been painted over, so no one was sure if it would work until the day we came in and started doing the labour. I really can’t praise Christopher Ross enough for making it happen and making it happen safely, because there was a lot of shit that could have gone wrong with a show like that.

For Retreat you’re credited as a co-designer with writer/director Kat Sandler. How did that collaboration manifest itself?
It just was a very collaborative process where we shared ideas and responsibilities, so when it came down to defining whose design it was, it was very clearly ours. I’d like to point out that the costume work by Holly Lloyd and the lighting design by Melissa Joakim was another huge part of the collaboration. I love working with those two, and I worked with them on both of these projects and their vision contributed as much to the overall look and environment of the plays as mine did. Melissa has impeccable instincts for lighting- she seems to know how a scene should look long before I do. Holly knows how to dress people in ways I could only ever hope to know. The team of Melissa, Holly, myself and Kat Sandler is a dream to work with, and I’m exceptionally proud of the work I’ve accomplished with these women.

Retreat was an ambitious set that really engulfed a lot of the Storefront Theatre. How long did it take to implement?
About a full week. We were putting the finishing touches on it until the doors opened on the first night. If you look at the press photos, it’s not actually done yet, because we took those two days in advance of opening. I’ve done a lot of immersive design though, so it’s something I like to do and commit to. I really enjoy building my own work, but this required a crew of four or five guys we brought in who really pulled together and made it happen, along with the usual suspects from Brouhaha and Red One. My parents were also hugely instrumental, as the lawn chairs, tents, canoe and a lot of the camping gear belonged to them. I borrowed a lot of things from people, and I even spent a day driving around with Brenhan McKibben collecting wood I’d found on kijiji. It was a crazy build.

What was your favourite design element in the set for Retreat?
It’s hard to say, there were so many nutty things in that set. My favorite was probably the hut in the back for Kat Letwin’s character, which I literally put together like a drunk person. I may have been drunk. I can’t remember.

Were you pleased with how the design worked in practice?
I think so. A lot of people responded well to it, and the actors had a lot of fun using it. I’ve really enjoyed being at The Storefront, because it’s this lab I keep returning to and I get to really push the space to see what can be done with it. Retreat was a big exercise in making a really, really complete and engrossing environment.

Do you have a favourite moment from either production?
The first time I saw the boys do the fight in Cockfight with costumes, set, props and blood was amazing. It just kept going and it was brutal and it was harsh, and it was unlike any fight I’ve ever seen on stage. Jeff Hanson choreographed something amazing there. I know a lot of people who said it was too real and too well done, and that it made them uncomfortable to be that close to the action and that it went on too long, and I’m just like “fuck yeah, violence should make you uncomfortable” I think people deserve to feel uncomfortable with the violence, that it should be in their face, that it should reflect the cruelty of the act of hurting someone. That’s the play, right there in that fight.

You also do a lot of work with Safeword. Artistic Director Brandon Crone told us in his interview for Donors last year that he likes to give you carte blanche to craft the space however you want. With that kind of freedom, where do you start?
Oh boy. There’s no defined way to start with someone who lets you go all out. Every project has been different with Safeword. Most of my directors know to let me do my thing, so I don’t encounter a lot of resistance in general, but there’s usually some ground rules about what I can and can’t do. Not so with Brandon- with Safeword I come up with the ground rules. As a company member, we start from a point of “what does Claire want to do?” and this is a very rare gift for a designer. Brandon’s work is unlike anything else, and I have to get myself into the psychological space of it. That can come quickly or it can take years. Our next show, Nature of the Beast, was my introduction to him, and it took me a year of thinking about it to come up with the design we’re going with. I’d say once I know the psychological head space of a Crone piece, we move onto the practicals: where are we doing it, how are we doing it, what will we use? I dream big and scale it to the budget and the resources we have. Nature of the Beast has been so cool for me, because we picked the venue together, we picked the audience configuration, and it wasn’t a director or a producer telling me “this is how it is.” I get to tell the director (Luke Brown, who has been awesome) how it is and it’s really fun to grab the reins and make the choices.

What would you say is your top priority in any design project?
To be true to the play and our intentions. To use design to expose the way our environments shape us. I really struggle to accept realism when I see it on stage because I feel like it’s complicit in the dullness of theatre. I feel like there are a lot of things that make theatre dull, these visual tropes that designers and directors return to over and over again, that make me want to shove a pencil in my eye. I have all these ideas about things I hate on stage- black backgrounds with hanging picture frames, kitchen sink realism, minimalism in general- and I have to work when I’m designing to avoid these cliché design elements, these things that have a very obvious and very over played psychological meaning, (blah, blah the empty picture frames represent the emptiness of the character’s lives blah, blah, blah). I also have to be true to the play and the director and the characters. I have to reconcile what I’m comfortable producing and doing with what is asked of me.

What’s your favourite design you’ve ever worked on?
I honestly can’t say. I love them all like children. Some of them were nightmares, but they’re my nightmares.

What are you doing now/ what’s your next project?
I [just finished] working on Dangerous Liaisons at the Storefront, and after that Safeword is mounting Nature of the Beast (March 26-April 11), also at the Storefront. My work in Liaisons came about when Ben Blais effectively dared me to do a set without spending any money, and Nature has been an ongoing plan of ours for two years.