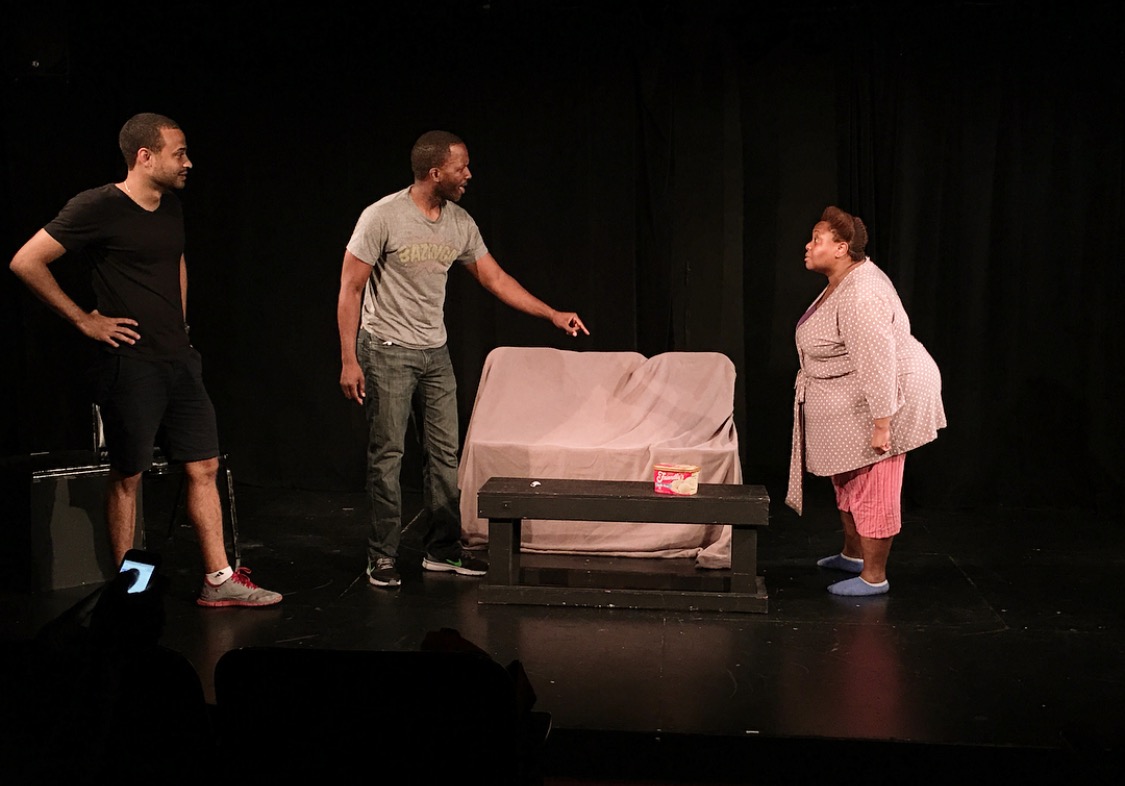 Every other month, seven playwrights come together at The Tank in Manhattan to engage in a creative collaborative process that results in seventy minutes of artistry sharing common themes and elements. The structure of Rule of 7×7, the brainchild of writer and producer Brett Epstein, sounds simple – seven writers conceive of and produce seven 10-minute plays in one month, and each play must incorporate seven rules – one rule selected by each playwright. On the evening of August 27, the rules were as follows: (1) fat, (2) “____? I thought you said ____”, (3) a 30-second dialogue free scene set to a 90s pop song, (4) violence, (5) the same word must be repeated back and forth between two actors, four times in a row, (6) someone eats something on stage, and (7) “I thought I was going to die but __ saved my life.” The results of this fast-paced, guideline-driven exercise were seven unique and quirky works of art, evoking the spirit of improv comedy but with greater structure and more cohesion than traditional improv.

Of the seven theatrical ventures featured on the night that I visited Rule of 7×7, three were brilliant and sharply written pieces that frequently had the audience roaring with laughter. Only two failed to blossom into fully-formed concepts, with storylines comprised of immature and not entirely coherent plot developments. Highlights of the evening included Rachael Mason’s absurdist comedy Funny Seeing You Here, James Anthony Tyler’s poignant and chuckle-inducing FATFATFATFATFATFATFAT!, and Brett Epstein’s nostalgic ode to teenage friendship The Song Is For Lisa. In some of the less successful one-acts, identifying each of the rules became something of a game – a hallelujah moment prompting a swig of beer (although, as Epstein points out at the beginning of the show, Rule of 7×7 is not a drinking game). However, in Mason, Tyler and Epstein’s shows, the rules were woven seamlessly into the narrative such that they often passed by unnoticed, to the credit of the playwrights who embraced the rules when crafting their stories rather than finding ways to fit them into a pre-conceived concept.

The less successful works, including Kev Berry’s Exit Through the Sock Hop and Dan Moyer’s The Lifestyle, suffer from being, respectively, too simplistic and trite and too complex and bizarre for the 10-minute runtime. Well-written one-acts, much like good short stories and short films, require both a concrete vision and sharp editing, and these are skills that not every writer possesses (or that not every writer demonstrates consistently). That is to say – it is a difficult art form to master. Despite having flaws, even Berry and Moyer’s works were enjoyable at times, often reveling in their own absurdity rather than attempting to take themselves too seriously.

Like many improvisational-style productions, Rule of 7×7 incorporates very few props, set pieces must be transformative and easy to move, and the lighting and sound design is minimal (due in large part to the single day spent staging the productions). While the artistic design team is small, the bi-monthly cast for this showcase can grow quite large as each show generally casts different performers. On this particular evening, 27 actors graced the stage and, while many delivered memorable scenes and lines (often with faultless comic precision), there were several standout performances, including Amelia Fowler in FATFATFATFATFATFATFAT!, Alex Haynes in both Funny Seeing You Here and No Limit Hold’Em, and Alex Mandell and Alex Gould in The Song is for Lisa. Alex Haynes, although tackling two minor roles, crafted memorable characters with his strong comedic timing and creative expressions. Teaming up, Alex Mandell and Alex Gould demonstrated great chemistry on stage as best friends Lucas and Paulie. They both appeared willing to sacrifice their bodies for the sake of physical comedy, and they developed a comfortable repartee on stage, much to the audience’s enjoyment. Amelia Fowler in the role of Shayla was perhaps the highlight of the evening. Bold and sassy, with a degree of assertiveness and self-love that most women would envy, Fowler’s Shayla is one of the most hilarious, invigorating and engrossing characters that I have seen on stage in quite some time. Although FATFATFATFATFATFATFAT! provided only a glimpse into Shayla’s life, Fowler gave the character dimension and left me wanting to see more of her story – not an easy feat in 10 minutes.

For theatregoers interested in entertainment featuring the lively and unpredictable elements of improv but with a bit more narrative structure, Rule of 7×7 combines the best of theatrical entertainment and improvisational art to create a rousing, and often riotous, evening that showcases diverse, young talent in New York City. Need extra incentive? The first beer is on the house.