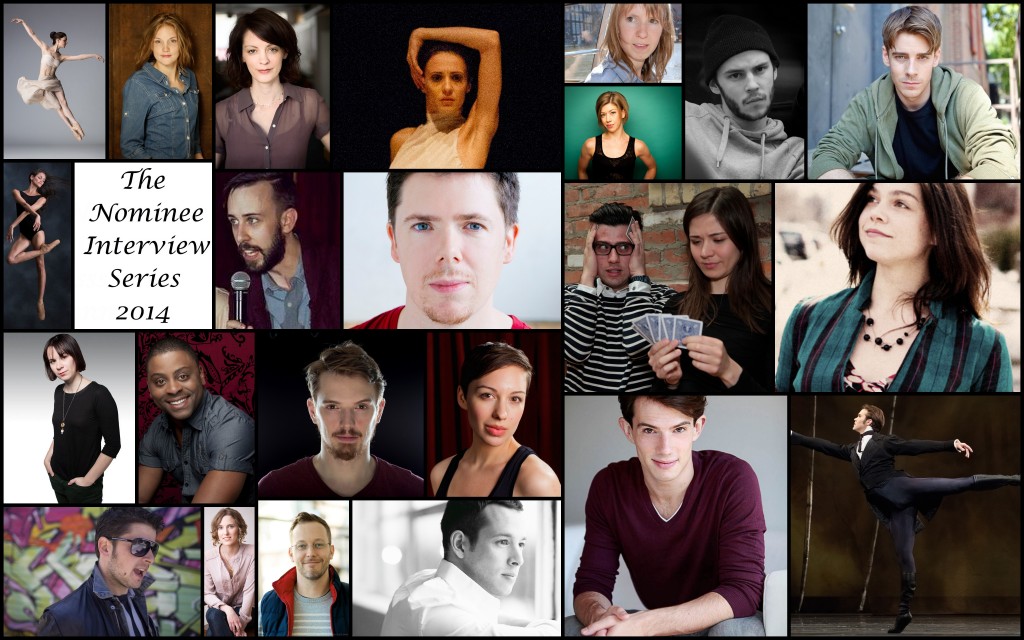 Last year’s Best Actor winner (for Soulpepper’s Angels in America), Damien is one of Toronto’s most prolific performers. So much so that he played a key role in not one but two of this year’s nominated Best Ensembles- the melancholy verbatim musical London Road at Canadian Stage (one of the most structurally astounding pieces all year) and Morris Panych’s beautiful new comedy Sextet at Tarragon (which was as emotionally complex as it was deceptively simple in concept).

Read Damien’s interview from our 2013 nominee series HERE then read on for an update on his amazing 2014. 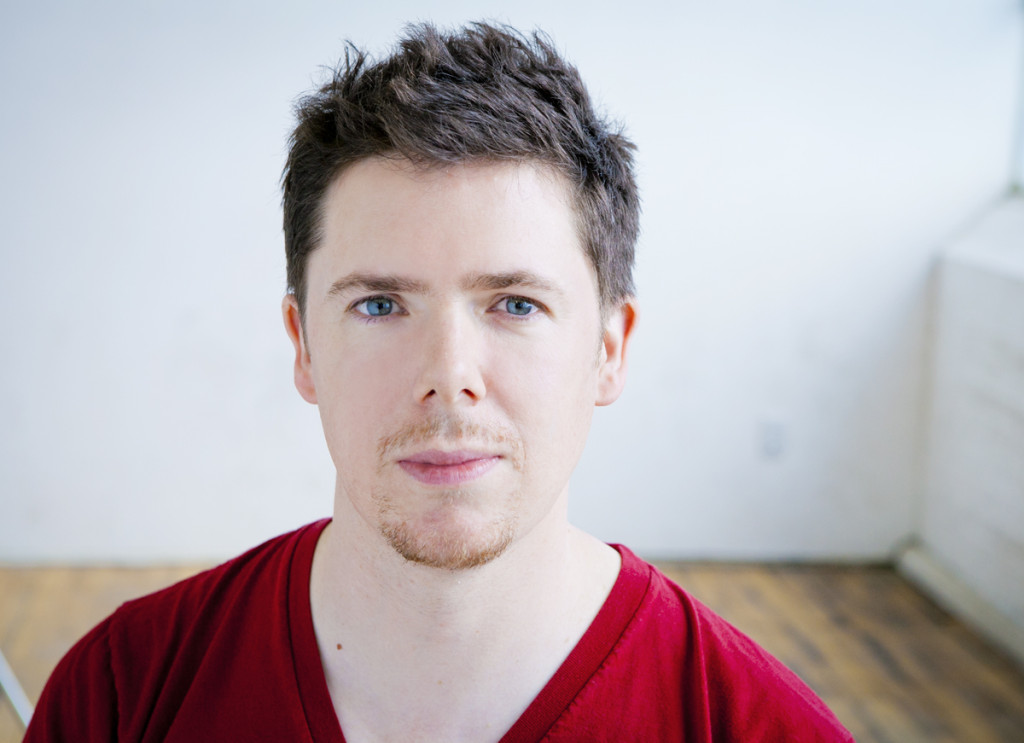 How’ve you been since we last spoke to you for the 2013 Nominee Interview Series?
I’ve been super!

You kicked off 2014 with one of the buzziest productions of the year- the docu-musical London Road with Canadian Stage. What was your reaction when the idea was first presented to you? Had you ever heard of the piece before?
Yes, in fact, I had seen it in London. In fact, I think I was the only member of the cast that had been lucky enough to catch it. But that’s why I was so anxious to be in it. London Road was the first show I ever saw at the Royal National Theatre. It blew my mind. I had never seen – or heard – anything like it. As soon as I heard that Canadian Stage was going to do it, I was lobbying pretty hard to get an audition. As it turned out, I was very glad to have seen the show, because I knew that it worked. I knew that if we didn’t screw it up, if we were half as good as the cast I’d seen, the show worked.

The score sounded incredibly difficult with lots of a-tonal melodies and unexpected leaps, and no rhyme scheme to help you out. Did you struggle at all learning the difficult material?
I don’t think I could possibly overstate how much I struggled. I was well and truly panicked. It was certainly the most difficult technical exercise I’ve ever had as an actor. I was the slowest person in the cast to learn the music. And I’m not being modest, and I’m not underplaying my musicianship. I think I’m a pretty good musician. But in that cast, I was a pretender.

Walk us through the rehearsal process for such a unique production.
It was actually very simple: work work work. We spent the entire first two weeks exclusively learning the score. In the third week we started using the afternoons to block the show, but the music learning continued. We didn’t learn the last piece until a few days before the end of the fourth week. On the last afternoon of our fourth week of rehearsal (four weeks before tech!) we did our first – and last – run through in the hall. On the morning of the first day of the fifth week, we started tech.

Each performer played multiple roles in the verbatim musical. How did you go about developing the unique characterizations for each of your characters?
Alecky Blythe (who conducted the interviews that make up the text of the songs and scenes) has a very specific technique for her actors to learn their text. So we followed that. Essentially, you begin by listening to the actual recordings. And then you start to mimic. And then you get up and start to inhabit. But you start with the actual recording, the actual voice.

London Road featured many of the country’s biggest names in theatre (both musical and otherwise). Tell us about working with that Best Ensemble-nominated cast.
I’ve never been in a cast that socialized less. We were all deeply (and anxiously) focused on learning the material and then bringing it to life. It was a truly co-operative experience. Very little ego. Just a lot of work, and a lot of supporting each other. Every single cast member was putting in a full day of rehearsal and then extra hours of homework. We all went out once, in the second week, and had a beer. And the next day, we all said how we’d enjoyed it, and how it was a big mistake.

Tell us about working with director Jackie Maxwell.
Jackie was a marvel. She was juggling so many things, and she had to wait so long for us to learn the material. And then she had very very little time to stage the show. But she never showed us her stress. Never. Not once. It was a bit of a magic trick on her part, I don’t know how she did. She was strong for all of us, because we were so anxious.

The subject matter of London Road was really heavy and the lines taken verbatim from the actual community who lived it. How did you feel the musical elements impacted the weight of the story?
Here’s my theory: in life, moments of harmony or unison are few and far between. Moments when we come together and express the same thing at the same time, or similar sentiments/ideas that are complementary. London Road felt true to life, because the moments of harmony and unison were so few and far between in the music. And when they happened, they were incredibly surprising and moving, just as they are in real life.

What was your favourite moment in that production?
My favourite moment personally was finishing my solo, “Cellular Material”. Because I could stop worrying about it. There were lots of other little moments of everyone’s work that I enjoyed every night. If I had to pick my favourite, I think it would be Sean Arbuckle’s drunk football fan in the bar scene. So unlike him! Very good acting, I thought.

Over the summer you returned to your My Theatre Award-winning role in Soulpepper’s Angels in America for a remount. What was it like coming back to that hugely successful production after nearly a year away?
It was a huge gift. We just got back to work. We went deeper, it felt like. The show was more ragged, more volatile. I liked it.

This fall you joined another Best Ensemble-nominated cast for Tarragon’s Sextet. How did you get involved with that production?
Oh, I was lucky. Morris Panych (playwright and director) just asked me to come in and read it at the Tarragon. And then I stuck around. 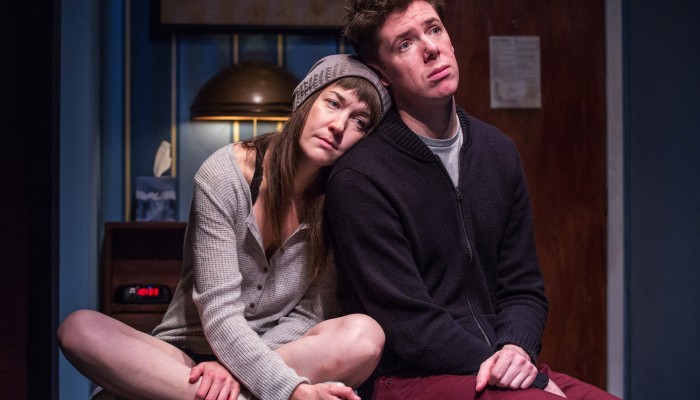 with Laura Condlln in Sextet

Most of your interactions in Sextet were with Laura Condlln, one of the most-nominated artists in the history of the My Theatre Awards. What was your experience like working with her? What’s something she hasn’t told us in any of her three Nominee Series interviews?
Well, she’s incredibly self-effacing, to the point of hilarity. She’s incredibly hard working and collaborative. She doesn’t punish anybody else when she’s stressed. And it’s fun to watch her punish herself. She’s a warrior – I loved loved loved working with her. Very loving, very detailed, very supportive. A real professional.

What are some of the rewards and challenges of working with a director who is also the playwright?
Well, it makes a difference with Morris, who is a first rate playwright and a first rate director. He knew what story he was trying to tell, which is all you want from a director or a playwright. And then you mobilize yourself to tell that story for him.

As a world premiere, did the play change much in the rehearsal room?
The play changed enormously. We cut 25 minutes off of it from first read to opening night. But I’ll be honest: my character didn’t change that much. I had a much more straightforward job. Everyone else had trickier characters and so Morris was refining those arcs with those actors.

What was the most important conversation you had with your director in developing your character?
Oh, I’ll never tell. Some things have to be secret.

You played a classical cellist. Is that a world you’re at all familiar with?
Nope! I’m not. But I love to research. So I researched that world. And met with a real life classical cellist and peppered him with annoying questions.

Tell us about working with the rest of your nominated all-star ensemble.
Super classy bunch, very open-hearted and fun. And we laughed ourselves silly. We hung out around the show too. Rebecca Northan is a great inventor of games you can play in rehearsal and backstage, so we did that a lot.

Do you have a favourite moment in that production?
I loved the moment at the end when I am talking about us all playing Schoenberg’s “Verklarte Nacht” and the rest of the cast is cradling their instruments like they are their lovers. And they all looked so beautiful and vulnerable. They never got to see that. Just me and the audience. I felt such intense love for them.

I feel like I see you at every opening night in the city. What have been some of your favourite shows you’ve seen this year?
Hmmm. Small Axe was stunning. The Seagull was magnificent. I loved The Waiting Room and Of Human Bondage and Spoon River. I’m sure I’m leaving some out. I try to see as much as I can. Because I love theatre, and I love my friends, and their work inspires me. Oh – I adored The Watershed in workshop. It’s playing during the PanAm/ParaPanAm Games. Don’t miss it. I loved Concord Floral.

What are you doing now/ what’s your next project?
I am in Montreal at this moment [with] my new play, We Are Not Alone at the Segal Centre. It’s a co-production with Crow’s Theatre, so we will bring it to Toronto sometime in late 2015 or sometime in 2016.

Do you have anything you’d like to add?
I am very proud of our community. We work hard, and we do good work, it’s world class, if you ask me. Also, if you’re in Montreal, come see We Are Not Alone, which plays until March 15th.