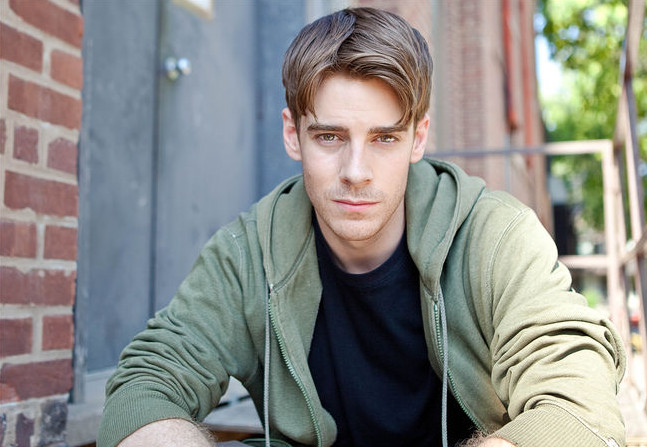 Back with his second My Theatre Award nomination in a row, the chameleonic Jeff Lillico is not only one of our favourite actors, he’s one of the most highly regarded in the country with credits from every major stage in Canada.

In Soulpepper’s Best Production-nominated adaptation of W. Somerset Maugham’s epic Of Human Bondage, Jeff once again stood out as Griffiths, a man whose immense charm battles far more immense tragedy, earning him a spot in the Best Supporting Actor category this year.

Can you remember your first experience with theatre?
My first theatrical experience was playing an evil zookeeper in our ground-breaking fourth grade adaptation of Bambi. We had one performance. I was standing in the wing about a minute before my entrance when I realized I’d forgotten my sole, integral prop in the class room upstairs. I sprinted down the hall, bounded up two flights of stairs, sprinted down the next hall and all the way back again, making it on stage in the nick of time for my entrance. PHEW. However, I was panting and heaving so heavily that I could barely get my words out through the entire scene. It was absolutely ridiculous.

Who are some of the artists who’ve had a big influence on you throughout your career?
Some of my top influences would have to be Ben Carlson, Jim Mezon, Goldie Semple, Neil Barclay, Christopher Newton, Jackie Maxwell, Paul Sportelli, Neil Munro (though I never had the pleasure of working with him), Albert Schultz, Joe Ziegler, Nancy Palk, Ted Dykstra, Stuart Hughes, Oliver Dennis and Stephen Ouimette.

A lot of Canadian theatre actors tend to stay in the same place year after year but you work regularly with almost every major company in and around Toronto. Do you have a favourite company or venue to come back to? Any favourite people to work with?
I grew up in Alberta but I have such deep love for this Ontario theatre community which I’m honoured to consider myself a part of. There are so many amazing places to work and you find yourself meeting the same wonderful people over and over again. It’s a pretty great life to be able to say hello, goodbye and hello again to such a spectacular collection of artists. Certainly though, the time I’ve spent with Soulpepper, and prior to that at the Shaw Festival, has always felt like home.

You were nominated for our Best Actor in a Play award last year for your chameleonic performance in Great Expectations. Tell us a bit about that production and the task of changing Pip so drastically as he grows up from a 9-year-old apprentice to a gentleman.
Working on Great Expectations was one of my favourite theatrical experiences. It’s a truly incredible and beautiful story. It was one of the rare times where I’ve been on stage from the first second of the show, to the very last, and there’s something so magical about getting to go on that journey non-stop with everyone in the audience. Hard to explain maybe but when you make entrances and exits the mask comes down, so to speak, but to be fully immersed the entire way through Pip’s journey was an absolute trip. It was such an amazing cast of actors flying in and out, through a billion costume changes. I felt in such good hands everywhere I turned. And in that intimate space and with Michael Shamata’s sensitive direction I felt I was a part of something very special.

You’re often tasked with playing really young characters (you were a kid again last year as “the prodigy” in Glenn). How do you go about capturing that youthfulness as a clearly adult actor?
I’m about as close to Peter Pan as they come.. Still a long way from growing up. No problem there.

Your nomination this year is for Of Human Bondage, one of the most celebrated productions of the year. What do you remember most about your experience rehearing that show?
Working on Of Human Bondage was without a doubt the most creative and inspiring rehearsal process I’ve been a part of. We were bringing a sprawling novel to the stage and trying to accomplish dozens and dozens of settings and transitions. Everyday we would come into the room and collectively brainstorm how best we could bring a particular moment to life. Everyone’s ideas were encouraged and nobody was precious about their own work. As a team we tapped into every bit of creativity we could muster and I really think we came up with some pretty stunning work. I give full credit to Albert Schultz for creating an environment where we felt safe to play and to share. Prior to this I had worked with Albert on some truly outstanding but inherently more conventional theatre. He cracked things open in the most incredible way with this piece.

Are you returning for the remount? Is there anything new you’re hoping to discover or try out in returning to the character?
I’m returning, and looking forward to another chance to go deeper in. I love remounts. Often I feel like the first time through I’ve worked in a really focused way, like a tunneller, endeavouring to journey straight to the centre of whatever it all might be about. But on the second pass I generally feel things really crack open in such a way that I’m able to explore and play with a wider range of choices from one performance to the next. (a good lesson for me to endeavour to carry forward to first-time productions and yet in practice, I believe there’s truth to this.)

You’re also nominated as part of the star-studded ensemble of Theatre 20’s Company. Tell us about working with that amazing cast.
Yeah, you really couldn’t ask to be in a show with a more wonderful collection of performers. It was a fantastic ride getting to be around all that talent. Particularly when so many of them had started the company and worked so hard to see it all come to fruition. To be up there with that group was a great honour.

As a rare actor who does plenty of both, how do you feel about musicals vs. straight theatre?
I love getting to do both plays and musicals and feel very lucky to have been able to flip back and forth. For me, my first love is always the acting, but a musical needs good acting every bit as much as a play does. My Mom would prefer if I always did musicals though. If I played Hamlet she’d probably afterwards say “When are you gonna sing again?”

In this year’s Ross Petty Pantomime you played a Justin Bieber-like singer with a secret heart of gold. Was it fun, embarrassing or both entering to squealing fans like a real pop star?
The panto was so much fun and never embarrassing. Well.. maybe the bombardment of subway posters was somewhat embarrassing .. ha. But the show is so much fun and so well executed. It’s so smart and knows so well what it is, that it never to my mind got cheesy or sentimental. Which somehow seems like a pretty substantial accomplishment. One of the most enjoyable experiences I’ve ever had on stage – without a doubt. And yeah, I was forced a bit out of my comfort zone and got to live my pop-star dream. Good times!

What are some of your favourite memories from your run in the panto?
I loved working with everybody in the panto. My favourite moment though hands down was always when Dan Chameroy as Fairy Plumbum would freeze Reid Janisse and I with his wand and then torture us for what started out as about a two minute bit and grew to about five minutes along the way. The audience would be in absolute hysterics. That was amazing, seeing the exciting new methods of abuse Dan would dream up everyday.

What have been some of your favourite roles you’ve ever played?
Raleigh in Journey’s End, George Gibbs in Our Town, Ben in Leaving Home, Fabrizio in Light in the Piazza, Norma Devine in Little Mercy’s First Murder, Skeets Miller in Floyd Collins .. & Romeo .. in some Shakespeare play.. those are a few that are top of mind.

What are you working on now/what’s next?
I’m just about to [open] The Dining Room, back with Soulpepper. After that I’m gonna be doing my first show at Buddies in Bad Times, Tom at the Farm, which I can’t wait for.