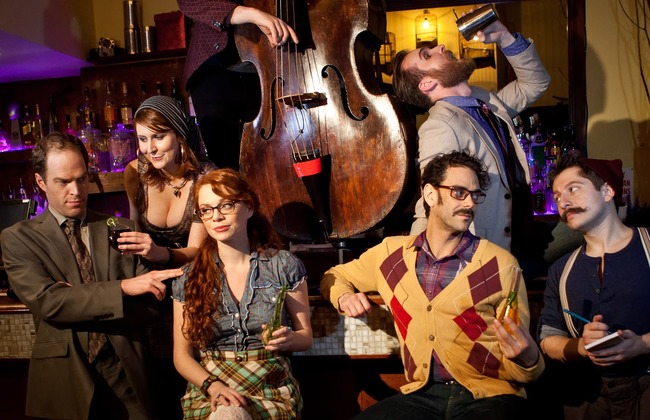 A Play in Three Cocktails

There is a production in the Lower East Side that wants to get you drunk.* It’s ingenious really. Alcohol intensifies emotion and gives the illusion of amplified senses – an ideal accompaniment to a theatrical experience. But that is the point in Stolen Chair’s new production Potion: A Play in Three Cocktails, which can be seen on Sunday nights at People Lounge in the Lower East Side. Drugs can have interesting short-term effects, from lowering inhibitions to turning a room of half-wits into philosopher kings (in their own minds, at least). Ultimately, while intoxication does not change a person, it can change how the world views that person.

Potion is spoken verse immersive theatre with a twist of lime. Audience members find themselves in Charley’s Potion Lounge, which serves something more enticing than mere cocktails. The bartenders are whipping up potions that can evoke emotions of whimsy, happiness, anger, and sexiness. Unfortunately, potion brewer Charley (portrayed by Natalie Hegg) has been unable to concoct a solid love potion. That is, until the bar is threatened with closure by a well-dressed health inspector who gives Charley an ultimatum: concoct a love potion that will make someone fall in love with him or face closure for serving patrons illegal narcotics. As Charley rushes to finish the potion, the patrons engage in some taste testing of various elixirs, with humorous results. The effect of the potions on each drinker may be temporary, but that does not mean that all of the inhabitants of Charley’s Potion Lounge leave the bar unchanged. For some, the potions mask feelings, for others the potions expose unexplored feelings, and for still others the potions magnify feelings to extremes. Each mysterious beverage is a catalyst that leads to human interaction in the bar, and it is that interaction that profoundly affects the bar patrons.

Potion is billed as a “spoken word opera,” and it is an interesting creative concept. Music, well-performed by the one-man band of Sean Cronin, underscores all of the scene as the actors speak in lyrical poetry to one another. Writer Kiran Rikhye matched scenes with specific opera pieces, deconstructed the pieces, and then crafted a script built upon the template of those operas. The result is a conglomeration of rhyme and verse that is both pleasing to the ear and hilarious.

But, perhaps that is just the booze talking.** Audience members are served three cocktails, all crafted by mixologist Marlo Gamora, at relevant plot points, including “curiosity,” “pins and needles,” and a “love” potion. I greatly enjoyed the trio of drinks, but several are unique, and not everyone at my small table was enamored. For example, “pins and needles,” a mix of smoky mezcal, ginger beer, and fresh lime juice with a chili salt rim, was reminiscent of excellent barbeque – not something everyone is prepared to ingest in liquid form. Not me though – bring on the alcoholic BBQ.  The only downside of the beverage service is that it tends to interrupt the flow of the show. The actors serve the beverages and, despite the attempt to integrate it with the plot action, the service takes awhile, and the action stalls while guests await their drinks.

The ensemble of Potion has one quality that I sincerely appreciate in a cast – they appear to genuinely enjoy performing the show. The very premise of Potion demands that its actors behave outrageously at times, appearing to throw inhibition to the wind. Liz Eckert does a particularly marvelous job as the bipolar drinker Andi who goes from hater-of-the-world to lover of life (and lover of fellow patron Philip, portrayed with gusto by David Skeist, after Philip shoots back a “sexy” potion).  Noah Schultz was a dependable presence, always ready to offer a perfectly timed quip, and Schultz and Molly O’Neill had some of the most entertaining exchanges of the night as O’Neill’s character Emma tried out a flight of potions.

So, instead of spending Sunday night parked on the couch dreading the work week, I recommend heading to the People Lounge to visit the patrons of Charley’s Potion Lounge and try out the potions being brewed there – it’s a unique evening of theatre and alcohol that is certain to end the weekend on a spirited note.