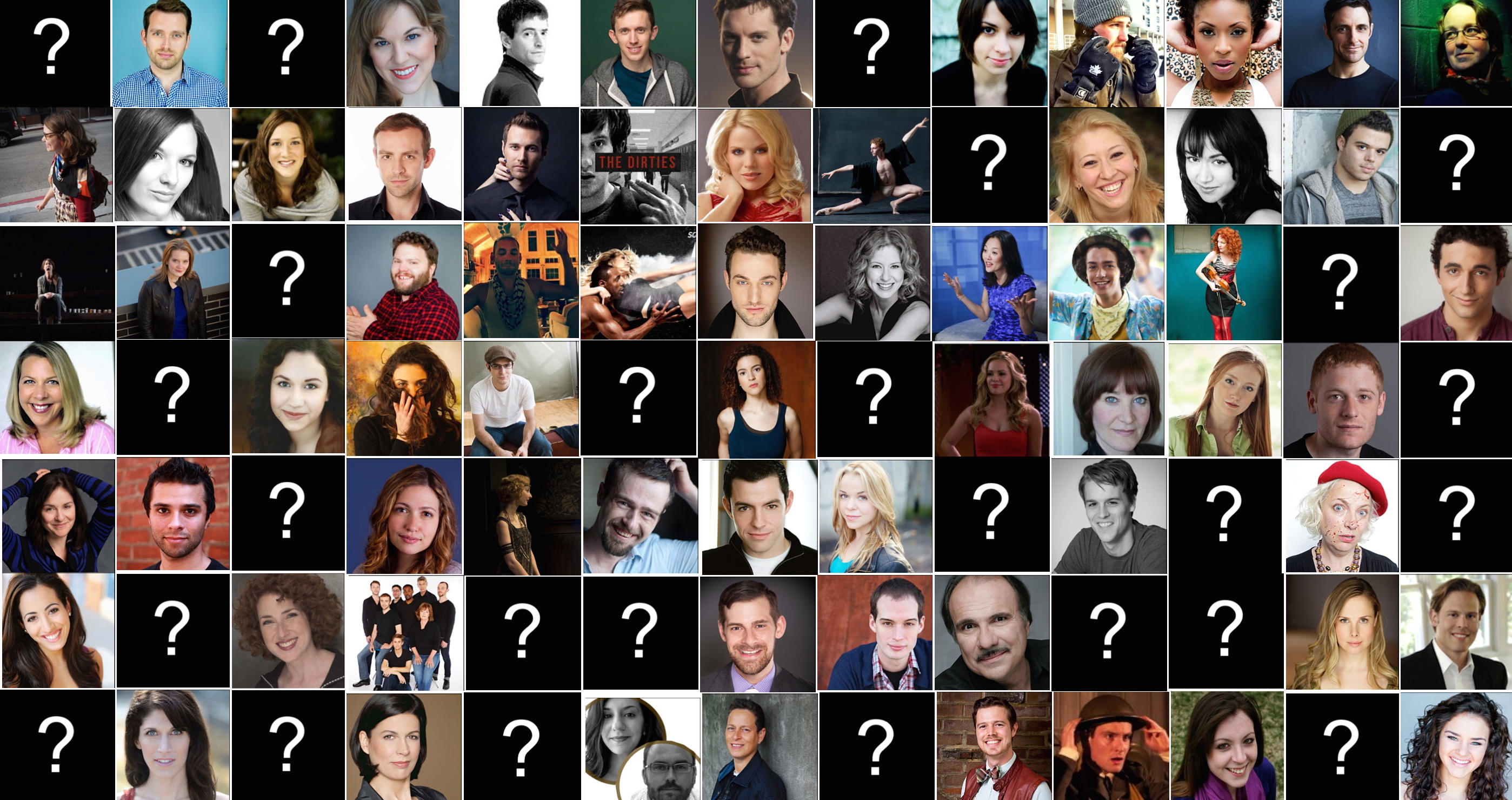 Charming and captivating, John Ambrosino sang his way into our hearts as the handsome and hopeful Gabey in The Lyric Stage Company of Boston’s On the Town for which he is nominated for Best Actor in a Musical. In his interview, he tells about his role as dreamy Gabey, his daily routines as a New York City actor, and his exciting news for the spring (spoiler: He’s visiting Boston briefly for a production at the Lyric!). 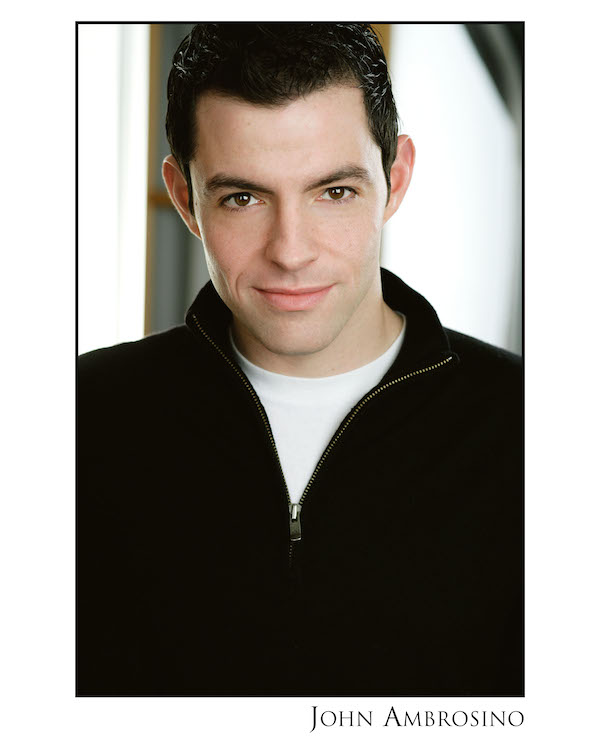 John, can you start by introducing yourself to our readers. Who are you? Where are you from? What is your performing history, background, and training?
I was born and raised in Avon, Massachusetts. I went to high school at Thayer Academy in Braintree, MA, and then I went to college at Bates College in Lewiston, ME.  I majored in Theater at Bates with a concentration in directing.  It was at Bates that I received the majority of my training including acting, singing, and dance.  I also did a conservatory semester at the British American Dramatic Academy where my focus was primarily acting.

After I graduated from college, I focused my career primarily in directing and producing.  I founded a theater company in Boston called The Animus Ensemble and served as the Artistic Director of that company for five years.  I decided to go back to acting later in my career at 27 years old.  I did some national tours and regional work, and then I joined the Las Vegas company of the Tony-Award winning musical Jersey Boys which I performed for two years before returning to the East Coast.

Have you worked with the Lyric Stage Company of Boston before On the Town? In what other shows and roles? Why do you continue to return to the Lyric (and Boston)?
I have performed at the Lyric before.  I was lucky enough to be cast as Princeton/Rod in the Lyric’s production of Avenue Q!

I love Boston, firstly, because it’s my hometown, but, secondly, because of the great sense of community among the theater artists. Working at the Lyric is like a reunion with great friends; I love every minute of it!

Talk to us about your character, Gabey. Who is he? What does he want? What makes the role special or unique? Why do you think that people can fall in love with the character?
Gabey is a young man in the Navy with one day off before he ships off to war.  In his 24 hours in New York City, he wants to find love, not sex, love.  Which I think is a truly basic human desire.  Out of the three sailors, he is the only one who sets out to find love and not sex which to me meant that this character was ready to experience a deep human connection even if only for a short time.  I think everyone can identify with this want, and so, he becomes an iconic American ideal for the audience.

What was the most challenging part about your role in the Lyric’s On the Town? What was the easiest part?
The most challenging part about On the Town was the old-fashioned structure of the show.  This musical was constructed in a completely different time and, because of that, it plays through like a series of sketches rather than a complete story. We start the show with all three of us, then my character is off for the next 20 minutes, only to return and tell you in a gorgeous song that he’s desperately lonely. Gabey then leaves again for 10 minutes and returns in one of the longest book scenes of the show where he meets his love interest, Ivy. He leaves again for 7 minutes, then returns to tell you in a song how lucky he is to find the love of his life and, when she doesn’t show up, its already intermission. I describe this only to point out that the difficulty for me was stringing together a fully-developed arch with very small moments of text and story.

So, you definitely showed that you are a male triple threat. Of the three (dancing, singing, acting), which do you think is your strongest suit, as it were? What do you think is your biggest strength and talent as a performer?
Triple threat?  I wouldn’t say that . . . I’m not really a dancer; I’m a mover, at best! Thanks for the kind words though!  My strongest suit is singing.  I’m drawn to musical theater because I believe that the music allows us a completely unique emotional entry into drama and I LOVE that!

What has been your favourite role to perform? If you could play the role again, would you? What would you bring to the role that you didn’t bring/know/use before? Are there any other roles that you wish that you could perform again?
My favorite role to perform was Bob Crewe in Jersey Boys.  I would play it again in a heartbeat!  I think if I were to play it again I would bring more age and experience.

Talk to us about the “typical” day as a New York City actor. How does your schedule/day change when you are performing in Boston? For example, where do you like to go/what do you like to do before and after rehearsals in the respective cities?
Well, in NYC, I’m often auditioning, so that’s a completely different energy than when you’re doing a show. When I’m in a show, I like to make sure I go to the gym before I go to rehearsal.  Helps me warm up both vocally and physically. I like to arrive to rehearsals quite a bit early to watch my colleagues work.  It’s rare that you get to admire your castmate’s work as a spectator while you’re in the same show.  So I try to do that as much as I can.

If you were only allowed to sing one song for the rest of your life, what would it be? Would you choose to have a partner? If so, would that change your song choice? If so, who would you pick to sing with you (let’s assume that they had to sing with you)?
I can’t answer this question . . . it’s too hard.  There are sooo many wonderful songs and too many wonderful partners.

What relaxes you? What stimulates or inspires you?
T.V. relaxes me.  Theater stimulates and inspires me.

I saw Gabey is a dreamer. About what do you dream? Do you consider yourself a day-dreamer, or do you live in the moment? How did you use your own personality and characteristics as Gabey?
I’m not really a day-dreamer; I tend to be moving and in action constantly. With Gabey, I tried to play against my energy and be much more in awe with possibility.

Part of On the Town was performing a particular (timeless) period in history. Do you have a favorite historical period? Are there any plays or productions set during this time period that you would love to perform?
I love time periods in theater because they allow us to examine human behavior in different ways. If a show takes place in the present, we often have difficulty feeling as deeply because our brains and our emotions haven’t matured around the subject matter.

How do you react to reviews? Do you read them during the run of the show? How have critics and audiences described you as a performer (feel free to use quotes from past reviews)?
I do read reviews . . . I love them.  I love to know what people say positive or negative about what they saw because I get a glimpse into different perceptions of the same event.

So, I’ve read the press releases; you’re set to return to Boston this Spring for the Lyric Stage Company’s Into the Woods, directed by the 2013 My Theatre Award Nominee Spiro Veloudos! Talk to us about your experience with Sondheim and knowledge of the show and the role. What excites you most about this production? Any sneak peeks or information about how you’re interpreting your role as the Baker? I know you worked with Aimee Doherty in On the Town; have you worked with anyone else in the cast?
I’m SOOOO thrilled to being doing Into the Woods! I adore Sondheim and I have yet to perform one of his shows! It also happens that Into the Woods is my favorite musical, so to be able to perform it is very exciting for me. I’ll wait to get in the room with Spiro to decide what we are actually doing . . . before the rehearsal room, it’s just words and music notes to me.  I’m overjoyed to be working with Aimee Doherty, Erica Spyres, Elise Arsenault, Maurice Parent, and Christina English who I have worked with before!

Besides Into the Woods, do you have any other upcoming productions or projects?
In NYC, I am one of three partners in the commercial theater producing company U Rock Theatricals. Currently, we are developing the 1995 Academy Award-Winning short film Trevor and Daniel Pinkwater’s book The Big Orange Splot into musicals for Broadway.