With the crazy summer theatre season finally coming to a close, many of Toronto’s smaller companies are taking the lull in big-ticket fare to kick off their seasons with intimate, impactful dramas. The first two plays I saw this week were two-act studies of modern life at polarized ends of the socio-economic scale, both written by contemporary Canadian playwrights. The third was a one-act reinterpretation of a revolutionary 1956 domestic drama by British playwright John Osborne, performed by a company that self-identifies as “contemporary, physical-based, [and] female”. They ranged from intense but uninspiring, to flawed but interesting, to profound and captivating. Let’s look at them in that order. 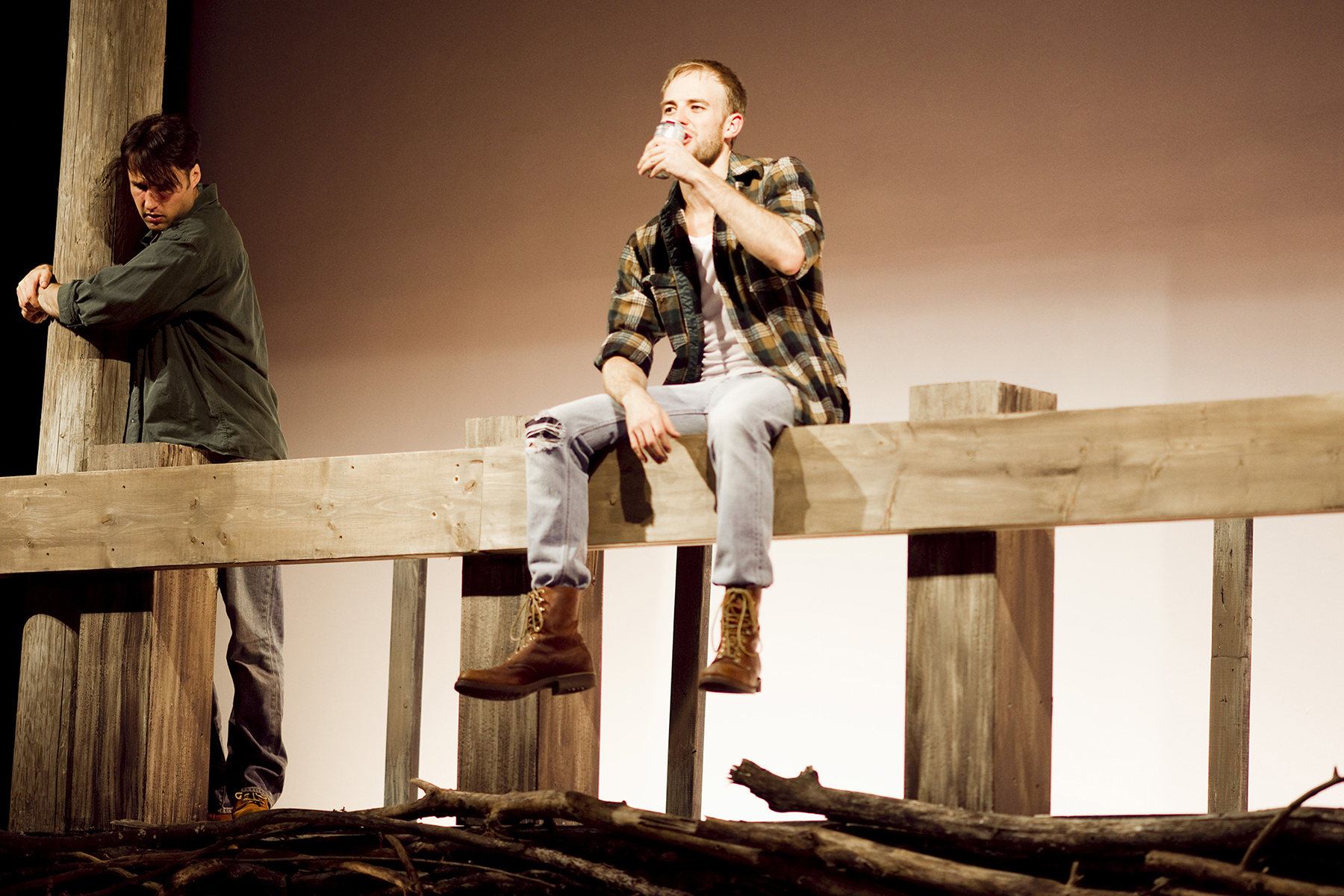 Bone Cage (Hart House Theatre)
This 2008 rural Canadian drama by Catherine Banks talks a lot about the “environmental terrorism” of clear-cutting, but it actually says more about the suffocating restrictions of poverty within an insular, single-industry community. His morally ambiguous job as a tree processor in Nova Scotia may be a major contributing factor in 22-year-old Jamie’s crushing unhappiness (though it’s clearly not the sole contributing factor), but the crux of the play’s tragedy lies in his inability to free himself from that unhappiness. Jamie (a compellingly tortured Nate Bitton) has a juvenile but well-meaning fiancee (Lindsey Middleton, perfectly capturing that slightly pessimistic domestic optimism of a tragically young, small-town bride), a haunted but caring half-sister (the superb Samatha Coyle playing both sharp and beaten down), a dangerously impulsive but loyal best friend (Kyle Purcell- charming, frustrating and heartbreaking, all in a good way), but no way to be happy unless he can get himself across the country and away from his current life (a feat that costs $40,000 he’ll never get). The depressing world of Bone Cage is filled out with three relatively happy people (relatively being a Very important word here), all either simple, misguided or flat out bonkers. The first is Jamie’s delusional father (Layne Coleman) who has exhumed his dead other son’s body to attempt to clone him (yes, really). He’s crazy, but at least he has hope (something that can’t really be said of anyone else). Then there’s the town simpleton, Robbie, a sweet but somewhat unimportant character played so beautifully by Tim Walker that he quickly became the character I was rooting for most. Robbie’s quirky and innocent sister Lissa is also likeable and sweet (played by Jennie Egerdie with lovely energy) but she too is cast aside by the tragedians at the centre of the drama. Though the performances are quite good (I would have liked a titch more naturalism but that’s splitting hairs) and Elizabeth Kantor’s woodsy set is excellent, Bone Cage doesn’t inspire much more than pity for its lost characters. I suppose I’m supposed to be roused to environmentalist action but that would have required more compelling characters making stronger arguments about WHY the practices are bad instead of just complaining that they are. 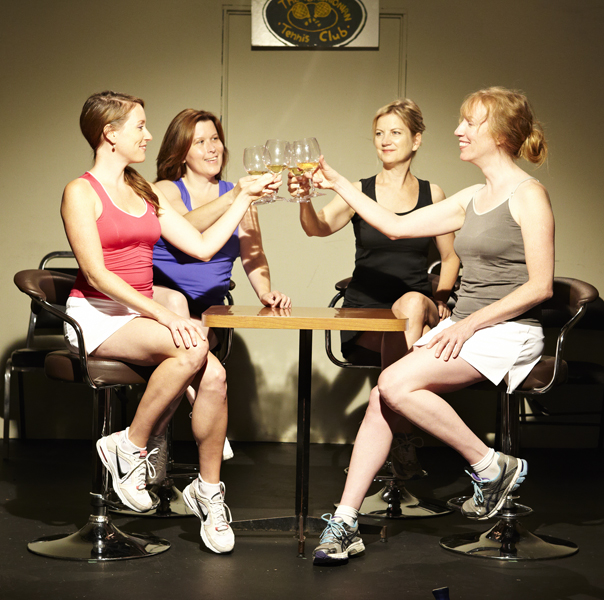 The Foursome (Sterling Studio Theatre Collective)
Jane Ford’s new black comedy The Foursome follows a trio of fairly stereotypical “high-end” Toronto women as they suffer the Intensely Dramatic effects of adding a new fourth member to their tennis group (after the hush-hush suicide of their former compadre). The play is not actually as inconsequential as that synopsis suggests since the sometimes-fascinating, sometimes-vapid, sometimes-both-at-once hot young socialite Dylan Vanstone (the charming Caitlin Driscoll) stirs up a lot of actual trouble in the form of character revelations both inwardly personal (one character discovers her sexuality, another her inner rage) and dramatically damning (one highly predictable twist that I won’t spoil, even though the astute viewer will guess it mere minutes after the curtain goes up). Ford’s best asset as a writer is her zippy dialogue, which flounders a bit when the cast can’t quite find their rhythms but soars particularly well out of the snarky mouth of comedian Kathryn Greenwood (the best in the cast by far, especially when playing the bright know-it-all therapist Linda in the play’s standout scenes). As an actress (playing the boisterous Kris), Ford is particularly moving in her reflective quiet moments while Driscoll shines when doubling as another Foursome member’s maddening mother (a portrait so amusingly real that surely she must be based on someone). The Foursome seems split between relatable, personal drama and over-the-top soap. The bubbling rage and insecurity that lies beneath the practiced facades of the titular Foursome is incredibly intriguing, and the way a fourth member everyone wants to impress can irreversibly upset a smooth social dynamic is an idea worth exploring. It’s also a really funny script. It’s only when The Foursome shoots for Big Drama that it ceases to be dramatically compelling. 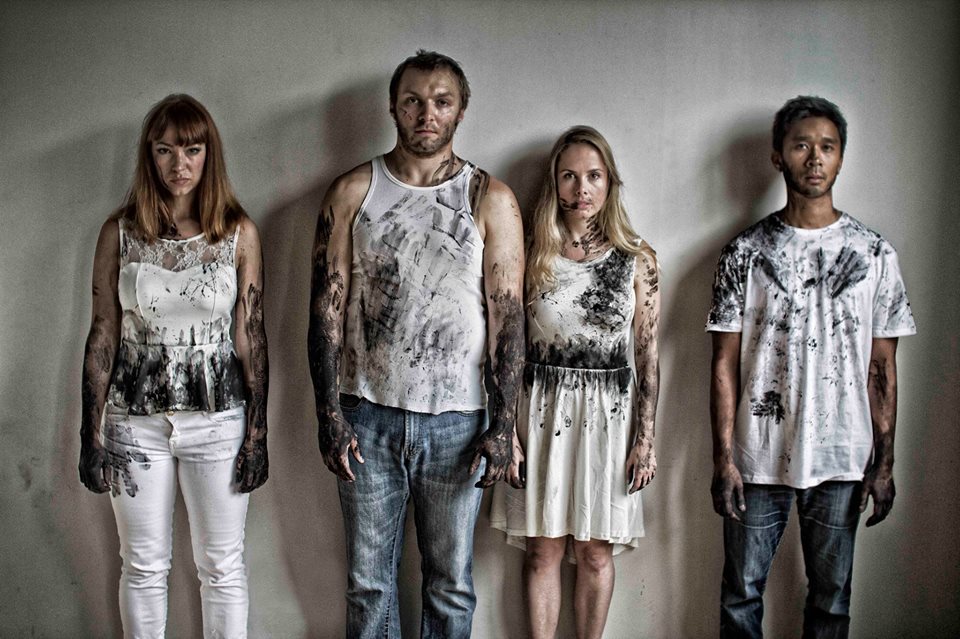 Look Back in Anger
(FeverGraph Theatre Company)
I struggled writing the previous two reviews because I was trying to give them their fair shake as decently executed productions of somewhat intriguing texts, but I kept worrying that whatever praise I gave to Hart House and Sterling Studio would somehow rob me of the vocabulary to effectively describe FeverGraph’s production of Look Back in Anger. Now I’ve gone and said that both of those shows have pretty good casts (though they’re a little stage-y; why is it so hard to find actors who speak as if they’re just coming up with the words?) and that the texts are somehow intellectually intriguing (which they are, to a point), so how do I say that Look Back in Anger has an amazing cast and a text that’s beyond intellectually (and emotionally) intriguing? Does my slight change of syntax effectively convey the gulf of artistry that lies between what the previous two productions achieve and what this one does? I don’t mean to put the others down; in comparison to most things, they’re more than decent. What I mean to say is that the comparison really shouldn’t even be happening. FeverGraph’s Look Back in Anger is special. It’s beautiful and torturous and challenging and entertaining all in a tightly-paced 90 minutes with just four actors in a small, uncomplicated space.

John Osborne’s text is a great one but, unlike so many solid productions of modern drama, the success of this Look Back in Anger does not rest on just good actors tackling a good work. Rather, it’s through director/designer Anita La Selva’s conceptualization of the piece for a “contemporary, physical-based, [and] female” company (and in FeverGraph’s smart and bold choice of the unexpected text) that Look Back in Anger becomes the remarkable piece that it is. Taken out of its original period but not rooted firmly in our own, this production points to the universality of its characters’ struggles. A man born in the “wrong time”, Jimmy as played by Eli Ham is not so much a transplant from a more restless time but someone who- try as he may- can never be comfortable with exactly where and when he is (no matter what period that may be).

The newspaper motif is taken to intriguing extremes when the oft-mentioned prop becomes Every prop and set dressing beyond a couple of chairs and an ironing board (used to iron still more newspapers). Interactions with the flood of papers (crumpled, folded, scattered) reveal the characters’ headspace, clarify important parallels, and speak to how they wish to change their circumstances (iron out the wrinkles or crumple it in a ball to be tossed far away?). I rarely find that the marriage of interpretive movement with a dialogue-heavy text works well, but La Selva uses eerie pre-recordings to break up the pacing and portray select dynamics through physicality without losing the dialogue. The effect is sensational. A delicate pas de deux between Tosha Doiron’s Alison and Adriano Sobretodo Jr.’s Cliff tells us far more about their intimate dynamic than just the scene’s dialogue ever could (and the conflux of live voices with the recorded ones is excellently haunting). The way that the forceful movement of furniture punctuates Sam Sholdice’s wonderful sound design, the use of 1093 Queen W’s space with a single row of audience on all sides, the striking balance between natural and heightened movement to illustrate the gravitational forces between the four characters (the fight direction of this production is also fantastic), the dissectability of greater meaning in every choice- Look Back in Anger is an exceptionally well-directed piece of theatre from every angle I thought to look from.

But La Selva is not onstage and all it would take is one weak link in the acting company to undermine everything that’s great about this production. Ham, Doiron, Sobretodo and Zoe Sweet do the opposite- they elevate the text, the design, the direction, the movement to astoundingly beautiful levels. Sobretodo, with his boundless energy and knowing smirk, gives Cliff the sort of rich inner life a foil rarely has. Sweet, similarly, makes Helena’s astounding leaps of logic seem organic by filling in the character nuances with a compelling mix of compassion and compromise. But it’s the married couple whose destruction and foreboding rebirth carries the story that delivers the most thoroughly heart-rattling performances. As the quietly tortured and romantically rash Alison, Tosha Doiron hides a world of emotion and neurosis behind astounding calm. She’s roused out of her compelling stupor only by romantic pinings (chemistry abounds within this cast, in all possible pairings) and memories of the happier past, until she’s moved to unleash her emotional ferocity in a feat of performance more honestly moving than anything I’ve seen of late. Her untameable husband- and the text’s most immortal character- is Jimmy, an uncomfortable man marked by shattering Kowalski-esque outbursts that cast a sad and scary shadow over his moments of genuine tenderness. In the capable hands of Eli Ham- an actor of imposing stature and loveable nature- Jimmy vacillates tragically between brutish terror and charming, snarky calm. When even this second, less tumultuous face is broken by Alison- and later Helena- to reveal a fragile, loving man underneath, the intricate layers that Ham has developed within his performance show their potency. When pushed even slightly, Jimmy’s hot-button temper rages to wild, almost entrancing effect but the human nuance never disappears, Jimmy (or anyone else, for that matter) never descending into the easy frame of villainy. It’s a captivating performance from Ham, a My Theatre Award Winner who is so consistently good that I’m starting to worry that I’m repeating myself. This, for the record, might be his best work yet.

Look Back in Anger is playing at 1093 Queen St. West in Toronto until September 28th. You should see it; just trust me on this one. Get your tickets HERE.

Girls: Incidentals
Rolf Potts' Vagabonding
Into the Woods Off-Broadway: After “Ever After”