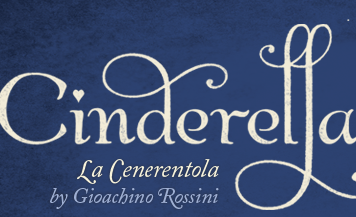 One of my goals for the new season is to broaden the scope of My Theatre’s Boston division. Therefore, I was delighted to attend Boston Opera Collaborative’s (“BOC”) La Cenerentola (“Cinderella”) by Gioachino Rossini. BOC delivers nothing better than a professional performance, for the viewing and listening pleasure of an audience of all ages. Performed at the historic Strand Theatre in Dorchester, BOC’s Cinderella was a pleasure, complete with superb singing, enjoyable acting, and exquisite musicianship and directing.

First, I can’t pretend to know much about opera; I’ve attended a small share and I’ve performed in even fewer operas. However, I have a number of years of musical theatre, wind ensemble, and choir experiences to know excellent music when I hear it. BOC paired with the mesmerizing Grand Harmonic to bring professional-sounding orchestra music to this production. Led with the artful and passionate conductor, Andrew Altenbach, the music soars through the two acts, leaving the audience breathless with Rossini’s truly virtuoso score. He accents just the right moments musically to bring out the best in the cast’s musicianship and voices.

I am disappointed to only see one set of this fantastic cast (August 4) with the beautiful and lovely Sadie Gregg playing the title role. Her voice hits all of the right notes for me; her acting seals Cinderella as more complex in this opera than in other stage adaptations. Gregg allows us to see the demure, the flirtatious, and the honest in Cinderella through her softest gesture and slyest glance. My biggest fault is that Rossini did not give Gregg enough material for which to tackle. This complaint, despite the three-hour length, also applies to easily-overlooked Alidoro, played with mastery by Thomas Middleton. Middleton is truly underutilized in this production because his rich baritone, musicianship, and art provide a few laughs and essential plot points and little else. The fault lies in the source material and Middleton makes the most of his abbreviated presence.

Clorinda and Thisbe, the wicked stepsisters, played by Laura DellaFera and Alexandra Dietrich, respectively, are too much fun and start the production off on a light, graceful, and humorous note. They delight in showing the audience their ugliest qualities and relish in the humor, despite singing in Italian. Yes, the biggest challenge, like many operas, is overcoming the language barrier for the audience, and this cast rises and exceeds this challenge beautifully. Their father, played by the commanding Ian Bowling, is consistently brilliant, despite his difficult material, both in his character and his music. These three actors feed off each other’s energies and moments, creating delightful moments onstage and help the audience transcend the language and cultural barrier to appreciate the humor and social commentary as Rossini intended.

The weakest links for me were Ramiro, the almost-charming prince played by Jason Connell. I want to like Connell, truly, I do, but he neither looks nor acts like the prince from my fairy tales. He fights hard against his source material and makes some good strides, but ultimately fails to live up to the mark. In addition, he just sounds weak. Maybe I expect too much from this tenor role, but I wanted to be overwhelmed by his voice. Instead, while Connell hits his notes and accomplishes the role, he neither impresses nor awes the audience. Without this admiration, I fail to see Cinderella’s attraction unless it’s a pure monetary relationship (exchange of beauty for wealth and power)—kidding, of course. The audience seemed very impressed with the foppish valet, Dandini, played with gusto by Nathan Owen, but he failed to impress me. I’m not sure if the language got in the way or if I was just bored with the character, but I felt that the gimmick had been played better elsewhere. I will also admit to be rarely impressed with a fop.

The set is simply designed by Shane Fuller, but effective. The costumes are lush (and accurate!) by the talented Caitlin Cisek. But the lights truly stole this production for me with Erik Fox’s gorgeous palette of colors. He transitions the scenes seamlessly with his use of colors and sets the mood perfectly. Much of the credit, however, goes to director Katherine Carter, who manages to tell this beautiful story with lavish strokes and attention to detail, melding the Italian arias with a modern flair. Her ability to direct and tell this story for all ages really transcends compliments. If all BOC productions are this professional, I have been missing out for the past four years in Boston.

I am unfamiliar with many of their productions for the 2013-2014 Season, but I am especially excited for Britten’s A Midsummer Night’s Dream next summer. They are also partnering with OBERON (not to be confused with the Shakespearean character) on two productions which are sure to add some excitement and ingenuity to their season.