The 2012 Toronto Fringe Festival Has Finally Begun! Actually, it began last Wednesday, but I just saw my first show so I say it has only now officially begun (remember how this site is an evil dictatorship? Never forget again). I’ve just returned from a 1:45pm-12am day consisting of 5 Fringe shows (and a detour to Fanny Chadwicks, but that’s a discussion for the hypothetical restaurant branch I keep threatening to add to this site). Here’s the lowdown and my very scientific grades: 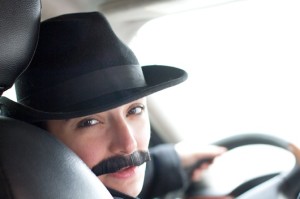 Mahmoud (Pandemic Theatre)
1:45pm- Tarragon Extra Space
The most notable thing about Mahmoud is its creator/performer Tara Grammy. She’s beautiful, she’s funny, she’s refreshingly adept at contrasting characters and she comes at playwriting with a clear and unique voice. Her production itself is a tad uneven and maybe even a little confusing in the end as the storylines collide and Grammy switches characters every few seconds, but the performance is remarkable. Or should I say performances. She plays a taxi driver, a gay man and a pre-teen girl whose lives all connect to the playwright’s own experience as an Iranian-Canadian. The most successful of these is the pre-teen girl, most likely because she is semi-autobiographical and therefore the most naturally developed of the characters (she’s also the funniest- I particularly loved her dream of being the “honorary female Backstreet Boy”- been there, Tara). The most interesting character is the title one, Mahmoud the friendly Iranian cabbie (with a PhD in engineering), and it’s his plight that is clearly the foundation of Grammy’s point but his personal climactic moment is unhelpfully overshadowed by other stories. Mahmoud is an interesting piece that could be incredible were it a little more distilled.
Grade: B 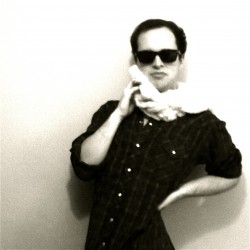 Meet My New Boyfriend, FAME (Poprah Productions)
5pm- The Solo Room
Andrew Morrisey’s one-man cabaret-style show is a lot like last year’s Mickey & Judy. In both, an openly gay twenty-something Sheridan grad recounts his life story while paying tribute to his showbiz idol(s). But while Morrisey is a lot of fun, his show lacks the narrative clarity of its predecessor and his voice is less memorable than that of Michael Hughes (aka “Mickey”). Accompanied by cutie-pie Iain Stewart on piano, Morrisey recounts random tidbits from his life that fit nicely with songs he likes, from “Don’t Get Around Much Anymore” to “My Favourite Things” from his favourite show, The Sound of Music. The best of his stories is about an ill-fated trip to Austria; the weakest about getting picked last in gym class (tell me: how is it that every single one of us artsy folk thinks we were picked last in gym class? It can only be true of like 1/22 of us). Under the ‘house rule’ of “please feel free to laugh with me at me”, Morrisey’s show is undeniably fun but it needs more direction than ‘humorous grasp at fame’.
Grade: B- 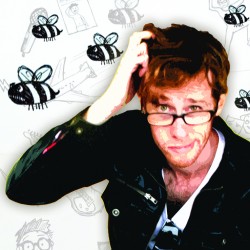 ZACK ADAMS: A Complete History of Zack Adams (Weeping Spoon Productions)
6:45pm- The Solo Room
Easily my favourite show of the day came at the hands of a geeky-cute Australian beanpole named Shane Adamczak who used his 55 minutes to tell the life story of his alter-ego Zack Adams. He’s funny, he’s charming, he sings, he plays guitar, he invented an entire backstory for his pants-wetting, inappropriate joke-telling, bestfriend-loving, failure-laden, guilt-ridden, fame-seeking, bee-obsessed, oddball of a stage persona. He’s awesome. There’s lots of cringe-inducing comedy and heartbreaking reality to ZACK ADAMS but Zack never feels like a loser protagonist whose problems you could fix in a minute; on the grand scale of things, he’s managing and he knows what’s up with his life and his failures. Shane/Zack commanded the tiny Solo Room stage better than any performer in my first bout of Fringe ’12 so for that he’s today’s winner. Also, he sings a song called “The Song of Outrageous Lies”, which is just plan fantastic.
Grade: B+ 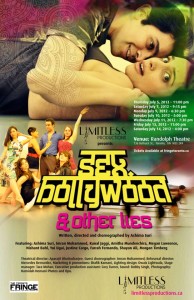 Sex, Bollywood & Other Lies (Limitless Productions)
9:15pm- Randolph Theatre
The worst production I saw all day had one of the best core ideas (second to only Mahmoud in theory). Writer/Director/Choreographer Ashima Suri’s “Artist’s Note” talks about growing up in a Bollywood-saturated society where any talk of sex is off the table. The inherent tension between those two aspects of Indian culture is fascinating, under-explored and perfect for the Toronto Fringe, specifically. Also, Bollywood dancing is awesome and the show description promised an “epic journey through song, dance, emotions and truth”- doesn’t that sound like a really cool show? It’s not. First of all, the dancing isn’t complex or impressive enough to justify casting dancers instead of actors because the story really suffers under the weight of halting, awkward acting (even the kisses are fake). But more than anything, Suri’s idea suffers under the weight of her poor execution. Neither of her principal characters seem rooted in plausible goals or beliefs of any kind, muddling through obstacles they themselves have created only to drop them for the next scene (she’s not that kind of girl, oh wait yes she is; she doesn’t trust Raj, nevermind now she does; she really really wants to be a Bollywood dancer, now she’s over it; etc, etc). The dialogue is silly and unhelpfully cliche in a story that is supposed to be a commentary on formula representations (on a related note, who was it that told Suri she can get away with storylines about being too fat/ugly/whatever for anything? She’s gorgeous). There’s a point deep within Sex, Bollywood & Other Lies, but it’s hidden beneath a pile of good intention gone wrong.
(PS: shoutout to Kunal Jaggi, who is far and away the best in the cast).
Grade: C-

Charlie’s Having a Baby! (Promise Productions)
11pm- Annex Theatre
This show is broad and strange and in desperate need of a re-write, but it has a few elements that are able to combat all that (not many, but I’ll get there). The biggest problem is Deon Denton’s script. The story is so unnecessary/implausible that it renders the whole exercise absurd (Charlie’s friend Toula pretends to be a man so she can convince Charlie’s dying Nana that her granddaughter did get married and pregnant afterall). Beyond that, the characters narrate their own actions (“time to sort some mail”!) and repeat themselves to the point of exhaustion. Poor Charlie is an unsupportive nag until her complete and unbelievable 180 for the happy ending, while Toula is an airhead hanger-on. The worst character though is Nana, an abusive, accusatory, plot-contrivance who is sharp and/or gullible as needed. Played as goofily as possible by the too-young-for-the-part playwright, the physical-comedy-forcing ailing grandmother comes off as Madea with duller comic timing. Patricia McPherson is a charming leading lady but has no shot with her thankless role. Luckily, the one character who is at all well scripted is played by Ruth Goodwin with particular dedication to the absurd comic selfishness that makes Toula actually laugh-out-loud funny at times (her one dramatic moment is also the only halfway believable dramatic moment in the script- well done, Ruth). Goodwin’s always had great timing but she’s at her wacky funniest here (that English accent is awesome-bad!) and she almost manages to save the show. Alas, that’s not a do-able task. On a completely related note: I am officially outlaw-ing the “blackout-set change”. If  your director is unable to come up with a solution creative enough to eliminate the wasting of my time while super-obvious stagehands move props,  you are hereby disqualified from inclusion in The My Theatre Awards for that year.
Grade: C

One Last Note:
Standout artists of the day aside, there is one Fringe star who deserves at least a mention, if not a salary raise and possibly the key to the city. “Magic Mike”, the venue manager for The Randolph Theatre is consistently the best advocate for the Fringe I’ve ever encountered. He’s been there in previous years- always with a big smile, energizing spiel and customized tshirt- but today’s showing was particularly impressive and had the giant crowd assembled to see Sex, Bollywood & Other Lies abuzz with comments like “that’s the best speech I’ve ever heard” and “we want to know which play You’re in” (his reply? “the play of life”- ha!). He’s not one of the ones who gives you puppy dog eyes until you’re guilted into “typing the Fringe” (instead he leads applause for people already wearing “I Tipped the Fringe” buttons and kindly walks right past you if you’re not reaching for your wallet) but I’m sure if there’s an official count he collects more donations than the others combined by being funny, enthusiastic, self-aware, complimentary to the crowd and just generally bizarrely good at his job. So kudos, “Magic Mike”, for making the ‘turn off your cellphones, no latecomers, no food, please give us money’ speech one of the most entertaining parts of a day full of Fringing.

The Play's The Thing: Unit 102's Hamlet
On Stage in TO: One Word One Acts
Nominee Interview Series: Katherine Gauthier

One Response to TO Fringe ’12: Round One