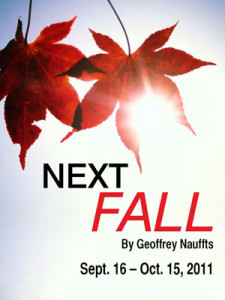 It’s remarkable how many meanings that the word “fall” can take in our daily lives. We fall asleep, we fall down, we fall in love, we fall back on those we love. This fall, I was delighted to attend SpeakEasy Stage Company’s New England premiere of Next Fall by Arlington, MA-native Geoffrey Nauffts. This stunning piece of theatre had audiences falling in line to see the 2010 Tony-nominee for Best Play on Broadway. The awards and accolades are no surprise to me; the script is punchy, poignant, and moving. The Boston community is fortunate enough to have a cast and director with the sensitivity and talent to navigate the many nuances of Naufft’s script for the full-range of meanings on the play’s clever title.

Next Fall tells the sweet and witty story of Adam, an older and cynical Woody-Allen-type gay man, and his younger lover, Luke. Their names are no coincidence; their relationship—and the plot of the play—is based on the Bible with a rift between Adam’s atheism and Luke’s devout faith. This play is not your typical gay love story, tragedy strikes before you ever see the couple kiss.

The play opens where none of us want to wake up: in ICU. Janie E. Howland’s scenic design is marvelous; her eye for color sets the perfect tone for each scene as the show transitions between past and present, home and hospital. I loved, and I found most impressive, the effortless transitions between scenes. Almost like drawing a curtain back—which they did in a couple of key moments—the cast acts as the crew, bringing on props and set pieces to move with minimal delays. I always appreciate a production who can keep the story moving and this story is written to flow like autumns leaves. Karen Perlow, the lighting design, also deserves high praise for her creativity and subtlety in the lighting design, from the bright, fluorescent waiting room to the warm lights in Adam and Luke’s home.

I have high expectations for director Scott Edmiston and his actors for this kind of show. Nauffts has written these characters with back-stories and heartbreaks revealed in single lines. The opening scene with Deb Martin’s Holly and Amelia Broome’s Arlene is spot-on brilliance. These women don’t waste any time with exposition, and I loved their instant chemistry. I was disappointed to never see the same chemistry between Martin and Will McGarrahan, who played Adam. These characters are supposedly best friends, but their encounters seem forced. Honestly, I expected McGarrahan to be a supporting, comic-relief character when he entered late in the first scene. Kevin Kaine’s Brandon did a remarkable job of commanding the scene with his stoicism, and throughout the duration of the show I continually wished I knew more about him. McGarrahan eventually did grow on me with his punchy, self-deprecation and severe lack of redeeming qualities. 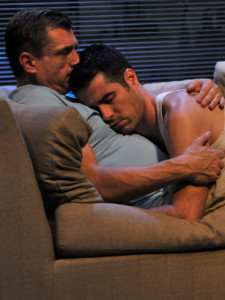 Though, as played by Dan Roach, I was often confused by Luke’s interest in the older man, I appreciated the couple’s strong chemistry; I almost believed that the older, candle-salesman could be in a long-term and loving relationship with the young actor/waiter. Roach’s character seems to be not flawlessly written, but written without flaws. Roach is stunning in the role, bringing extra energy and charm which seems almost saccharine, except for a poignant scene with his father (Butch, played with verve by Robert Walsh) and a heart-wrenching collapse with McGarrahan late in the play. Contrast that challenge with McGarrahan’s difficulties as a leading man with more neuroses than Monk, and you have two inherently flawed main characters. McGarrahan and Roach surprisingly and quite refreshingly rise to the challenges in the script by exploring how two seemingly incompatible individuals can be faithful and committed despite their differences. These themes of both self-acceptance and acceptance of others provoke strong feelings at the end of the play, as I was left wondering where these characters were going and who they had become. I found Nauffts clever as he interspersed moments of each character’s fall from their previous state of being and how these characters rose again to a new, albeit different, existence. I found Broome’s transformation the most impressive with Walsh’s transition coming in a very close second because of the way they developed chemistry and purpose with the other characters.

As I previously mentioned, I was confused and annoyed by the lack of development in Martin and Kaine’s characters. Both actors were inviting to watch in the beginning of the show, but quickly seemed to lack a purpose, especially in Act 2. I don’t know if this is a playwriting flaw, or attributable to the director or actors. Their charm and stage-presence seems at odds with their lack of development. Quite similarly, I couldn’t tell if I liked McGarrahan as an actor or character. The actor did a phenomenal job with Act 2, especially in his scene with Broome and final scene with Roach, but McGarrahan struggled for my approval in Act 1. I suppose the character is written in such a way that he doesn’t need our approval. He just is. As the leading man in a story as much about tragedy as love, though, McGarrahan needed more from either the playwright or director.

Any criticisms are quickly ignored because these actors are truly committed to telling this story. I was a believer in both the script and the company by the middle of the second act. These actors make their daily struggles seem natural and effortless to portray, despite the gravity of the production’s themes and story. In a time where we question those we love, those we can’t understand, and ourselves, this production falls back on what we believe in and the faith we have in others and ourselves.

Take the time to fall in love with this wonderful production as they explore the little faiths we have in our lives and how important it is for us to cherish them.

Next Fall runs in the Robert Studio Theatre in the Stanford Calderwood Pavilion at the Boston Center for the Arts, 527 Tremont Street in Boston’s South End until October 15.

One Response to Tony-Nominated Play Gets New England Premiere