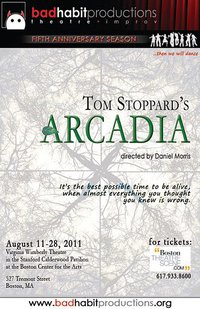 Tom Stoppard’s Arcadia is one of the most interesting theatrical pieces written in the 20th century. It’s quick-witted and academic, funny and touching, thought-provoking, heart-breaking and wildly entertaining. With heavy parallelism linking the superb characters between two eras in a single household (1809 and 2011- the studied and the studying), Arcadia becomes a sort of puzzle for the audience, putting the pieces together as Hannah and Bernard try to, discovering the missing links and the importance of the character connections. It’s one of those pieces that when directed and acted competently can be a lightning-fast night at the theatre that’s memorably rewarding for the audience.

Boston’s Bad Habit Productions was far more than competent in their handling of such precious material this August. Director Daniel Morris both designed the beautiful and functional open-concept set and used it perfectly, negotiating his actors around a tricky four-sided audience setup. The work of lighting designer Michael Clark Wonson and sound designer J Jumbelic added wonderfully to the tone of the piece and Barbara Crowther’s costumes were wonderful.

But it was the altogether very strong cast that really brought Stoppard’s largely character-driven piece to life.

Alycia Sacco delighted in the key role of Thomasina Coverly. A precocious (understatement) and endlessly girly young teenager, Thomasina walks the line of being a bit annoying, but Sacco mastered the innocent genius that she carefully blended with a hint of comical brattiness, thankfully without ever losing her likability. 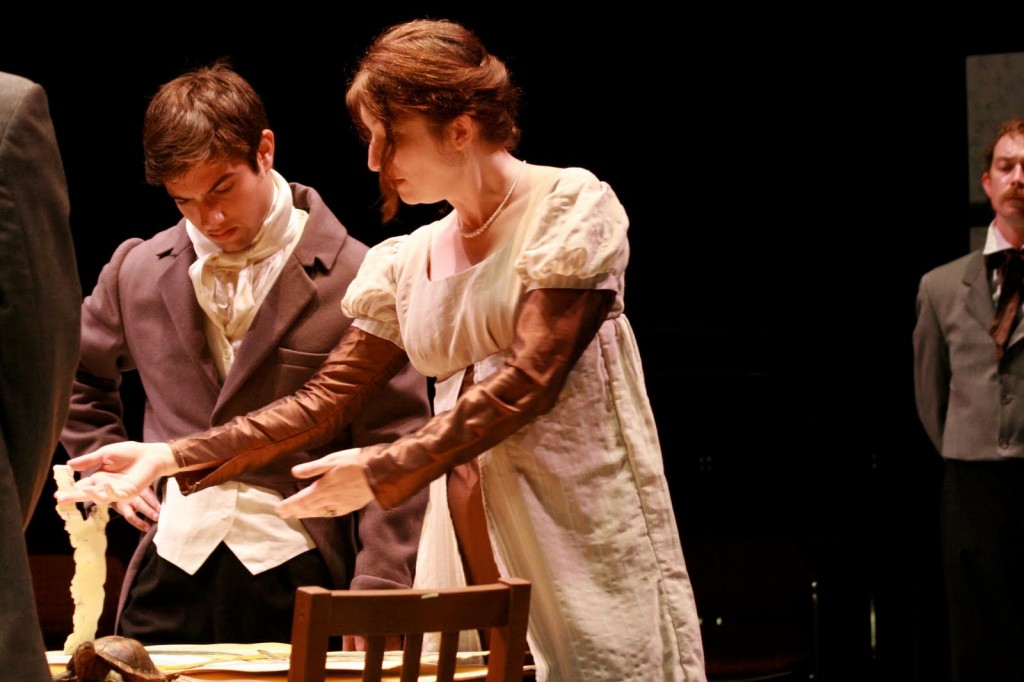 Greg Nussen helped her out tremendously by bringing his wonderful charm and knack for palpable chemistry with him to the scene-stealing role of Septimus Hodge. Despite the extreme subtlety with which their relationship develops, Nussen and Sacco sparkled enough in their banterific scenes together that I was willing to buy absolutely anything they were selling me.

Also endlessly believable was the wonderful A Nora Long as Lady Croom. With easily the best British accent of the lot, Long had a mature ease that allowed her performance a lived-in quality as though this was the skin she was most comfortable in- graceful, stern, refined and the mysterious combination of coldly sexy.

The play’s other leading lady had a bit of a harder go. Sarah Bedard (no relation), though charming and in possession of excellent comic timing, wasn’t quite grounded enough to pull off the snarky researcher at the heart of the present day story. She was swallowed up by John Geoffrion’s exuberant performance as Bernard Nightingale.

Nick Chris fared better with the intellectually taxing role of numerically minded Valentine. The privileged young man’s aloof intensity is a bizarre note to hit, but armed with “universal symbol for nerd” glasses, the perhaps-a-bit-too-handsome Chris pulled it off somehow.

The final piece to the modern day puzzle lay with Rebbekah Vega Romero as Chloe Coverly. An oft-overlooked character, the essential element to a good Chloe is the sense that while she wastes her efforts on more trivial matters, within her lies the potential to be Thomasina’s modern day intellectual equivalent. With the bright Vega Romero (Sacco’s long lost twin) in the role, that came through- especially if you thought to look for it in her somewhat limelight-starved performance.

The last cast member has the potential to be easily overlooked because his character hardly says a word throughout the entire piece, but as the generation-spanning combo of Gus/Augustus, Luke Murtha delivered a wonderful performance that at any given moment could wordlessly steal your attention away from the flashier characters.

Mostly on the backs of the outstanding ensemble, Bad Habit Productions delivered a fantastic take on an exceptional play. If only there were more young companies with this sort of gravitas.

3 Responses to Living in Arcadia with Bad Habit Productions