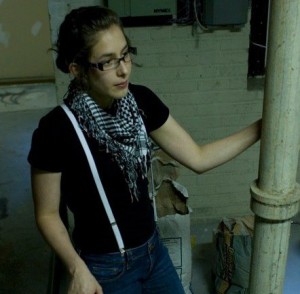 Sarah Gazdowicz is the brains behind The Independent Drama Society’s Romeo and Juliet, nominated for 2010 My Theatre Awards for Best Actress (Megan Cooper), Best Actor (Adam Lauver) and Best Production. Sarah herself is up for Best Director of an independent/local production.

Read on for Sarah’s thoughts

Can you remember your first experience with theatre?
What I recall most is a feeling rather than a specific event. I remember watching any sort of performance (theatre, dance, street performers, puppet shows) and thinking, “Wow! I want to do that! I want to make people feel the way that I do right now.”

What first drew you to the directing?
Directors are comparable to visual artists in many ways: they create a visual that is meant to convey a tone or idea to the viewer. Unlike a visual artist however, a director cannot do their work alone, they must collaborate with other artists in order to create a piece: actors, writers, designers, technicians, etc. Through the combined efforts of these artists, words, light, color, movement and sound come together to create a living, breathing alternate reality that is both concrete and illusory, specific and universal, eternal and ephemeral. How cool is that!?!?!

Who have been some of your biggest influences thus far?
Peter Brooks’ The Empty Space really opened my eyes to theatre’s significance as part of the human experience: Like everything else, theatre must evolve in order to remain relevant. We cannot move forward, however, without first understanding history. Look back, move forward, just don’t stand still – stagnation is death.

If you could direct any play ever written, what would it be and how would you approach it?
Someday I would love to do an all female production of “King Lear”. The idea of a really stripped down production appeals to me, as it would allow me to focus on the collaboration between the actors and the text and witness some talented actresses really dive in and explore roles that they would not normally be given the chance to play.

You’re also an actor. Which would you consider your primary role: actor or director?
Almost all of the decisions I have made as a director are prompted by my experience as an actor; it’s something I find impossible to turn off.

What have been some of your favourite parts you’ve played as an actor?
I think one of my favorite productions still remains an all female Hamlet I did when I was in high school through McCarter Theatre in Princeton. How often does a vaguely chubby 14 year old girl get to play Claudius across from three different Hamlets four years her senior and a Gertrude who was a about a foot taller than her? Did I mention the show was done in masks?

Some other favorites have been Abigail Williams in The Crucible and The Duchess in The Duchess of Malfi. I would love for someone to give me another crack at those roles.

Do you try and go to the theatre often? Is it helpful to view the work of other directors? If so, what have been some of your favourite productions?
I try to go as often as time and money will allow. Watching theatre is always a learning experience, however I try to enjoy it as an audience member first and do my analysis later on. A company called Whistler in the Dark did one of the best productions that I’ve seen recently. They did stories from Ovid’s Metamorphosis with six actors. They created a beautiful atmosphere using only two sets of blue silks and sounds created by the actors. It was an incredibly powerful evening.

Why Romeo and Juliet and why punk rock?
Romeo and Juliet is a play that I’ve always enjoyed and have come to like more and more as I’ve gotten older (ironically). I knew that IDS (The Independent Drama Society) had wanted to do a Shakespeare and R and J seemed just the thing for a young, up-and-coming company. Using a punk aesthetic for this show wound up being a no brainer: the language in the play is passionate and rough, the story is fast-paced and intoxicating, the characters are as charming as they are impulsive. If ever there was a play that looked you in eye and said ‘Fuck You!’ Romeo an Juliet is it.

Like any well-known play, the most common challenge is having an audience see the play from a fresh perspective, without superimposing images from other productions they’ve seen, or what they remember from High School English class or the Baz Luhrmen film. The particular challenge with Romeo and Juliet is that people have preconceived notions about the story and the characters, particularly the lovers. Romeo and Juliet, however, are neither the embodiment of a romantic ideal or two stupid adolescents too hopped up on hormones to think straight; convincing an audience they fall somewhere in the middle is one of the plays biggest challenges.

Walk me through casting- were they easy decisions to make or did you struggle filling the roles?
Some decisions were insanely simple while others were a bit more complicated. Ultimately, I was looking for an ensemble of eight talented and intelligent actors, and that’s what I was lucky enough to get.

What’s your rehearsal process like? How long did you have to work on this piece?
We had a long rehearsal period, more than three months. After the play was blocked, this allowed ample time to play with the text, explore character relationships and have actors who were playing multiple roles create distinct characters that they could easily transition in and out of. We also had a series of ‘Punk Education Nights’ hosted by Abigail Neuhoff who acted as our ‘Punk Dramaturg’ in addition to being costume and set designer. During these sessions we listened to music, watched film clips, drank malt liquor, let out our anger and aggression in the rain and discussed punk lifestyle, fashion and philosophy. My hope was that by having a better understanding of punk culture, the actors would be able to find an aspect of themselves that aligned naturally to that anarchical spirit so that their ‘punk attitudes’ on stage would come from a genuine place.

The frame device of actors putting on a show was particularly effective. What was the thought process behind it?
I needed a way for the audience to accept a story they knew well being told by eight actors in their 20’s playing multiple characters many of which were not of their age or gender. The framing device not only gave us the freedom to do that, it also created a certain energy before the show which allowed the audience to re-evaluate their expectations of the play and bond with the actors in an atmosphere of shared excitement.

Your production featured a lot of double casting. Why did you choose to link particular characters the way you did (ie: Paris/Benvolio, Friar/Mercutio, Montague/Nurse)?
The double casting choices were primarily based on how one could do ‘Romeo and Juliet’ with the smallest possible cast. In hindsight, some of the parts could have easily been redistributed, but there was an unintentional poetry to some of the pairings, my favorite being Lord Capulet/The Apothecary, that I would never have touched.

What are some of the major ways in which you deviated from the original text?
The biggest alteration we made to the original text was the cinematic splicing of the final scene at the Capel’s monument . The dramatic climax of the lovers suicide and Friar Lawrence’s race against time is a bit muddled in the original text and can cut the tension that should be building for the audience, allowing them to believe even for just a moment, ‘Maybe he’ll get there in time.” The audience knows what will occur in that final scene from the very beginning of the play, however it doesn’t mean that the tragedy of the event should lose it’s sting.

What are you working on now?
I am currently involved in IDS’ latest production of Glengarry Glenn Ross as an ASM [(assistant stage manager)]. I am also working on proposals for both Tennessee Williams’ The Glass Menagerie and Chekov’s Uncle Vanya.

If you could pick one definitive moment in theatre up to this point (as an actor or director), what would it be?
I think it’s those moments when you know that hard work and practice have paid off and you’ve learned something; I like that those moments always balance themselves out with the ones where you watch other productions and performers and think “I can always be better.”